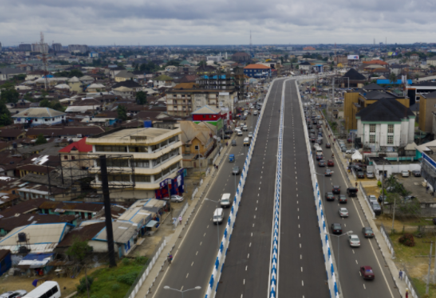 The Rivers State Governor, His Excellency, Nyesom Ezenwo Wike, CON, DSSR, POS (Africa), has once again described the technical engineering capabilities and competence of the country’s construction sector leader, Julius Berger Plc, as “…the strongest and most reputable engineering integrity benchmark” in Nigeria.

Gov. Wike made the remarks during the commissioning of several high grade infrastructural development projects ably and successfully delivered as contracted and scheduled by the company in Port Harcourt last week.

There were serial celebrations in the Rivers State capital last week as the newly constructed and commissioned projects included a flyover, a dualized road, a new House of Assembly Quarters, and another road dualization flag off.

The Lagos State Governor congratulated the Rivers State Government and commended the dependable contractor for the good and durable quality of infrastructures being delivered in Rivers State for commissioning for the beneficial use of the people.

Julius Berger’s regional manager, Engr. Juergen Fischer who represented the company’s managing director at the events, on behalf of the executive management and the board, expressed the company’s appreciation to the government and people of Rivers state for the confidence reposed in Julius Berger as the contractor to deliver the key infrastructural projects.

Fischer said the Orochiri-Worokwu flyover was the 7th in the series of successfully constructed flyovers by Julius Berger for the Rivers State Government.

According to Fischer, with the commissioning of the Orochiri/Worokwu Flyover and all its adjoining service roads, turns and roundabouts, the project closes the last gaps on the strategic Aba expressway within the Rivers State capital, Port Harcourt, freeing it of every travel obstruction.

Fischer also proudly recalled Julius Berger’s landmark construction and delivery of the Rebisi, Rumuola, Oro-abali as well as the new GRA flyovers, promising successful deliveries of other ongoing projects being handled by the company for the Rivers State Government.

Another major infrastructural project, the Ogbunabli/Eastern Byepass also constructed by Julius Berger Plc, was also commissioned by the Rivers State Government during the ceremonies.

The Special Guest of Honour for the ceremony was the former Governor of Sokoto State, Senator Aliyu Magatakarda Wamakko. He congratulated Governor Wike and the Rivers people for the superb quality of the dualized road and commended Julius Berger for a job well executed.

The self-consisting Rivers State House of Assembly quarters also built by Julius Berger was also commissioned by the Special Guest of Honour, the Rt. Hon. Speaker of the House of Representatives, Femi Gbajabiamila during the serial project commissioning events in Port Harcourt.

For the flag of a new project to be constructed by the ever-reliable Julius Berger for the Rivers State Government, the dualization of the Azikiwe/Iloabuchi road in Port Harcourt, the former Governor of Ondo State, H.E. Dr. Olusegun Mimiko was in Port Harcourt as Special Guest of Honour.

At this event, Gov. Wike said that “Julius Berger has continued to prove to us that it can take on any construction and engineering job; they deliver to specification and on time. No delay, no story.”

It would be recalled that earlier in the year, during the commissioning of the Rumuola and GRA flyovers which were also built by Julius Berger in Port Harcourt, Nyesom Wike, a clearly satisfied Executive Governor of Rivers State, had emphatically stated that, “JBN’s work is enviable benchmark for engineering competence, strong technical capacity and unwavering commitment to delivering excellent and lasting quality”. The Governor further said, “I therefore congratulate Julius Berger for another clear proof of your ability to deliver good jobs, and on schedule….Well done Julius Berger.”

Engr. Fischer expressed Julius Berger’s appreciation to both the host communities and the JBN project team for the peaceful cooperation that birthed successful execution of the projects.

Throughout the multiple projects commissioning and flag off events, traditional rulers and leaders of thought, youth and women organizations in Rivers State and from across the country including former and serving Governors, ministers, Senators and members of the National Assembly among others were present.

It would be recalled that just before the ceremonies, the Rivers State Government released a Press Statement to strongly refute a false and unduly sensationalized report that a flyover under construction in Port Harcourt had collapsed.

In the Press Statement released by the Office of the Hon. Commissioner for Works, the Rivers State Government called the false alarm “an erroneous narrative being shared by mischief-makers with the sole aim of causing unnecessary panic amongst unsuspecting members of the public.” The Rivers State Government urged the public to disregard the false alarm in its entirety, and assured the general public that the structural integrity of the flyover being constructed by the reputable engineering construction leader, Julius Berger Plc, remains strong.

The Rivers State Government explained that there was only a slight accidental shift of a beam by an excavator driver working on site to remove a broken down vehicle.

The Government Press statement also stated that no injury whatsoever was recorded during the incident.

Enquiries by press correspondents at the Ministry of Works in Port Harcourt revealed that routine work has since commenced at the project site, where the shifted beam has been replaced.