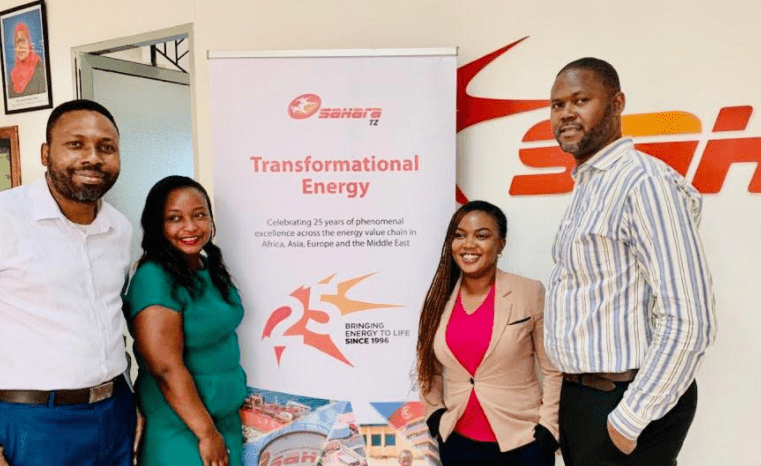 Sahara Tanzania Limited, a Sahara Group company, has expanded its storage capacity for petroleum products to 72 million litres in line with its commitment to promoting availability and reliability of top-quality products in Tanzania and other neighbouring African countries.

“Since our Tanzania operations commenced in 2015, Sahara has expanded its infrastructure from 10 loading arms and 4 storage tanks with a combined storage capacity of 36million litres to 20 loading arms with 8 storage tanks, with a combined capacity of 72million litres, spurring economic development in Tanzania through availability of petroleum products,” said Olumuyiwa Aladejana, Country Manager, Sahara Tanzania Limited.

The company has an ongoing expansion project aimed at increasing its storage capacity further to store more Automotive Gas Oil (AGO), Premium Motor Spirit (PMS) and JET A1. The project is expected to make Sahara Tanzania one of the largest storage terminals, providing an avenue for increasing employment opportunities and economic growth in Tanzania.

“It is also important to note that our terminal is automated, and we have since committed to the construction of 2 Liquefied Petroleum Gas (LPG) tanks which gives a total capacity of 6,000cbm as part of Sahara’s drive for technological innovation and enhancing access to clean energy in Tanzania, Rwanda, Zambia, Malawi and Congo,” he added.

Aladejana who was addressing media analysts on Sahara Tanzania’s performance, said the company was delighted at the opportunity to support the nation’s Vision 2025 as a leading player in the oil and gas sector, which contributes significantly to economic growth and development in Tanzania.

Vision 2025 represents Tanzania’s broad vision of its development goals as a middle-income country in 2025, characterized by high-quality livelihoods; peace, stability, and unity; good governance; a well-educated and learning society; and a competitive economy capable of sustainable growth and shared benefits.

“Sahara Tanzania is committed to contributing to the achievement of this noble target through our operations in the energy sector and interventions by way of sustainable development projects in Tanzania. We commend the government’s robust policies and firmly believe Tanzania is on course to achieving the target and Sahara will continue to collaborate with all stakeholders in this regard,” he added.

Aladejana said it was heartening to see energy conglomerate, Sahara Group and other leading Africa energy companies ramp up their competitiveness in the global energy market. She however, noted that African countries need to harmonize their product specifications to boost intra-Africa transactions.

Mrutu said Sahara Tanzania’s interventions include upgrading the Library at Pugu Secondary School that serves over 1000 students and the provision of toilets and washrooms at Salma Kikwete Secondary School to promote the Sustainable Development Goal that speaks to good hygiene and sanitation.

The company has also implemented several youth empowerment interventions, including career guidance and personal finance advisory sessions and the widely commended #MyFutureStartsWithMe conference that urged young Tanzanians not to give up on their dreams.