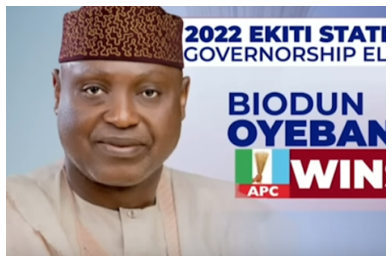 He polled 187,057 votes. Oyebanji won in 14 of the 16 local government areas in the election conducted on Saturday.

Oyebanji was declared winner and returned elected by the State Returning Officer, Prof. Kayode Oyebowale, at  3.05am Sunday.

The poll was however characterised by vote-buying in all the 16 LGAs in the state, leading to the intervention of the operatives of the Economic and Financial Crimes Commission (EFCC), who arrested some vote-buyers.

Some of the suspects were paraded at the Oke Ori Omi Area Division of the Nigeria Police Force.

The suspects were reported to have been caught with bundles of cash allegedly used for vote-buying.

Some other persons were also arrested at a private residence with a book containing details of voters of a certain voting area.

Though the election was said to be calm and peaceful, sponsored thugs had a field day destroying ballot boxes in the stronghold of opposition parties in Ise Ekiti and Ilawe Ekiti Polling Units.

Ballot boxes in Ilasa, Polling Unit 001 in Ekiti East, another stronghold of the opposition party, were destroyed by sponsored thugs.

The Nigeria Civil Society Situation Room (Situation Room), which observed the election, said in a statement that it received reports of widespread vote-buying by political party agents across the 16 LGAs in the state.