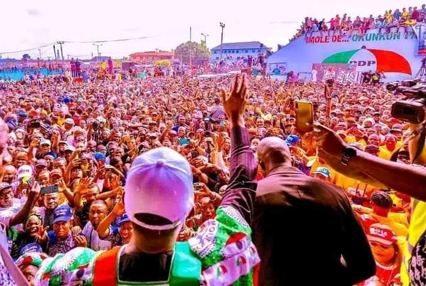 Atiku Abubakar is a unifier and the only person that can deliver Nigerians from the problems the country is currently facing, according to the National Chairman of the People’s Democratic Party, Dr. Iyorchia Ayu.

Ayu made this statement at a mega rally of the PDP presidential candidate Atiku Abubakar in Ribadu Square Yola, Adamawa his home state.

He said: “With the number of people across various parties I see here today, I have no doubt that our party will reclaim power in Nigeria come 2023.

Ayu noted that Atiku Abubakar has what it takes to lead Nigeria, “even though we are here to receive decampees, the turnout is very impressive.”

While handing over the decampees to Governor Umuru Finitiri, he urged the governor to give them equal playing ground.

Lending his voice on behalf of the decampees, the member representing Fufore/ Gurin constituency, Mr. Shaibu Babas said: “me, my colleague and our hundreds of supporters dumped our party to join force with Governor Finitiri because we have seen the transformation he has brought to Adamawa.”

Atiku Abubakar, the People’s Democratic Party candidate in his remark, said “In my 30 years in politics, Adamawa people have always supported me.”

While commending the good works of Finitiri he urged the people to also give him support and vote him back for the second time.”

“Since my emergency as the party’s presidential candidate I did not come home to say thank you because I have been going around to sort out things, this is not a campaign but a welcome rally to say thank you.”

”We will be working together to ensure victory for our party at all levels.”

In his remark at the rally, Adamawa state Governor, Ahmedu Umaru Finitiri said, Adamawa will remain a PDP state and” we will give PDP block vote come 2023.”