Combined profit of the 30 most capitalized and liquid firms on the bourse otherwise known as the Nigerian Stock Exchange NSE -30, fell by 1.08 percent to N1.44 trillion in December 2019, the first drop in four years, as banks dominated company profits by sector. 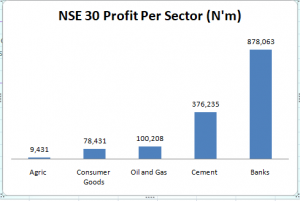 Most big corporates from banking, oil and gas, Agric, to consumer goods capitulated to myriad of challenges such as stern regulations, weak consumer purchasing power, spiraling inflation, decrepit infrastructure and volatility in oil price.
A breakdown of profit figure by sector shows the largest banks on the index saw combined profit increase by 9.12 percent to N878.06 billion in December 2019, the lowest growth since 2015.
Banks’ earnings have been growly slowly since 2018 when yields on short term government securities began to drop, and it slumped to single digits as the Central Bank of Nigeria (CBN) barred individuals and domestic firms from participating in its Open Market Operations (OMO).
Consumer goods firms are the hardest hit from an economic downturn as cumulative net income fell by 32.46 percent to N78.43 billion as at December 2019.
A drastic reduction in capital expenditure spend by government due to weak revenue is also hurting earnings of operators in the industrial good industry as construction activities have remained lukewarm.
The combined net income of the three dominant Players -Dangote Cement, Lafarge Africa and BUA Cement dipped by 15.55 percent to N376.23 billion as at December 2019.
Conglomerate giant Transnational Corporation of Nigeria (Transcorp) saw net income slump 82.03 percent to N3.70 billion as at December 2019.
The net income of the largest listed Agric companies Presco and Okmou reduced by 24.62 percent to N9.43 billion to December 2019, thanks to illegal importation of cheap products into the country.
Abiola Gbemisola, analyst at Chapel Hill Denham Limited said that in the first nine months of 2019, some importers were using the ECOWAS Trade Liberalization Scheme (ETLS) as a ploy to import crude palm oil from Malaysia and claimed it was goods from neighboring countries.
However, oil and gas firms bucked the trend as their combined net income increased by 59.59 percent to N100.20 billion as at December 2019, largely driven by strong uptick in the profit of Seplat and Ardova.
Nigeria’s GDP growth slowed in the first quarter (Q1) of 2020, as the impact of social distancing measures adopted in March weighed on economic activities.
According to the Q1-2020 GDP report published by the National Bureau of Statistics (NBS) on 24 May 2020, economic growth slowed to a nine-quarter low of 1.87 percent year on year (yoy) from 2.55 percent yoy in the fourth quarter Q4-2019 and 2.12 percent yoy in the second quarter Q2-2019.
Analysts attribute the lackluster performance of companies in the past few years to lack of transformation policy on the part of government, and they added that the present administration has failed to create conducive environment for businesses to thrive.

Nigeria’s inflation rate increased by 12.34 percent (year-on-year) in April 2020; thanks to border closure by government that sent food prices skyrocketing.
Capital inflows has continued to decline on the back of reduced portfolio investment, even as central bank weakened the currency to meet the dollar demand of foreign portfolio investors.
The total amount of foreign investment inflows into the Nigerian economy declined by 31 percent year on year (y/y) to $5.85 billion in the first quarter (Q1) 2020 from $8.51 billion in Q1 2019, according to a Capital Importation report of the NBS.
The NSE ASI year to date has shed -5.41 percent since the start of the year to close at 25,383.43 points.
Analysts have warned that the coronavirus pandemic that resulted in record drop in crude oil price and disruption in business activities could stoke an economic crises worse than the global financial crises of 2008/2009 and economic downturn of 2016.
The NSE-30 firm’s cumulative profits fell by N15.88 billion in 2019 profit, even as the negative impacts of the coronavirus shock on economic activities has cast a pall on future earnings.