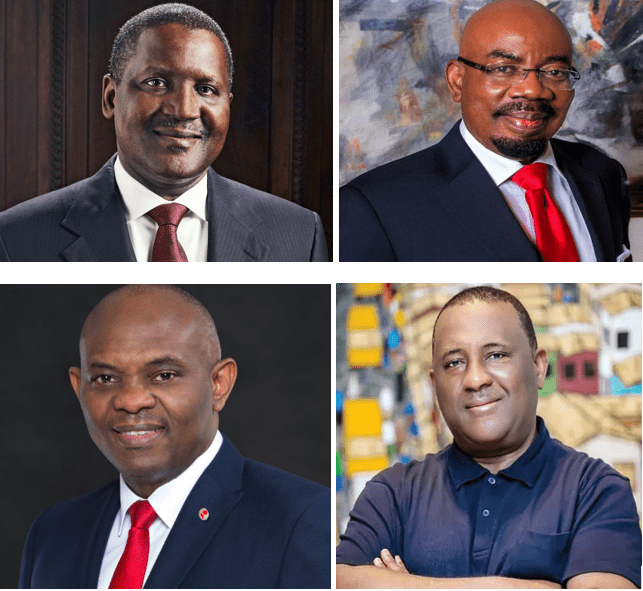 Nigerian billionaires haven’t been beaten down by the pandemic, they have actually thrived in it, collectively increasing their wealth by N1.79 trillion, since the depths of the coronavirus induced stock market lows in March 2020.

MoneyCentral analysis found that Nigerian billionaires with liquid assets like stocks have done relatively well, since Nigerian equities have rallied some 30 percent so far this year.

Leading the pack of Billionaires laughing all the way to the bank was Aliko Dangote whose 80 percent ownership in Dangote Cement helped to increase his net worth by N1.12 trillion as the stock rallied to N199 per share on Friday from N116.8 per share in March.

MoneyCentral profiled 6 Billionaires with fortunes made from industries ranging from financial services to manufacturing.

The billionaire is the single major shareholder of Zenith Bank, one of Nigeria’s largest bank by Asset Base, owning directly and indirectly (Institutional investors Ltd, Lurot Burca Ltd, Jovis Nigeria Ltd, Veritas Registrars Ltd, Zenith General Insurance Ltd, Zenith Securities Ltd) about 5,059,336,405 shares out of the 31,396,493,787 ordinary shares available. This gives him a 16 percent stake in the bank.

Zenith shares have virtually doubled since March 31st, moving from N11.4 per share then to N23.95 per share on Friday Dec 04.

Wigwe’s net worth surged by N4.03 billion since March after Access Bank shares rallied by 48.6 percent between then and December.

The captain of the largest lender by market value in Africa’s largest economy has direct holding of 32,146,651 shares and indirect holdings of 9,481,350 shares for a total of 41.6 million shares. GTB shares are up a whopping 89.4 percent since March.

The 6 Billionaires wealth gain while impressive highlights the growing financial inequality in Nigeria. The N1.79 trillion wealth gain is more than the total amount all Nigerian households combined, approximately 200 million people, spent on grains and flour, fish and seafood, meat or poultry products in 2019, according to the Nigeria Consumption Expenditure Pattern report released by the National Bureau of Statistics (NBS) in May 2020.