First Bank and FCMB need to raise capital to meet new minimum Basel III requirements set by the Central Bank of Nigeria (CBN), according to Renaissance Capital in its latest Banking report.

“We compute the minimum Tier 1 capital for domestic systemically important banks (D-SIBs) as 13.25%. Using the latest available capital data for each bank, we determine that FBN and FCMB did not meet the minimum, while Access has the thinnest buffer,” Renaissance Capital analysts led by Adesoji Solanke, said.

For Capital Adequacy Ratio (CAR) for D-SIBs computed by RenCap as 17.0%: 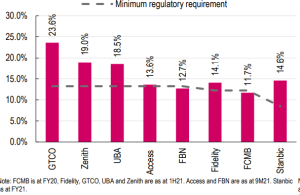 Following the 2020 postponement of Basel III implementation due to the pandemic, the CBN announced on 2 September 2021 that a parallel run of the accord will begin from November 2021 for an initial period of six months.

The regulator noted that this could be extended for another three months based on the supervisory performance of the banks, and if successful, Basel III will become fully effective. According to the CBN, capital add-ons for all banks will be implemented in a phased manner.

The CBN published guidelines to tackle the key issues addressed by Basel III which include capital, leverage, liquidity and large exposures.

These guidelines require the banks to shore up additional capital buffers against future unexpected losses.

Meanwhile, tier 1 capital is the sum of CET1 and AT1 capital, net of the regulatory adjustments applied to those categories.

Tier 1 capital ratio of 7.5% for national and regional banks, and 11.25% for international banks and D-SIBs.

For holdcos, the regulator stated that the minimum CAR should not be less than the capital ratio requirement of any banking subsidiary within the group. Here, the reference subsidiary should be the one with the highest minimum capital requirement.

For context, if the highest regulatory CAR of a subsidiary is 15.0%, the holdcos’ CAR should not fall below this.

Impact of Basel III on the Nigerian banks

According to Renaissance Capital, the implementation of Basel III creates certain benefits for the Nigerian banking system. These include a sturdier capital base, better leverage structures which can help prevent insolvency in times of economic stress, stronger liquidity buffers and a reduction in concentration risks.

However, there are certain other issues worth keeping in mind:  Increasing the capital adequacy requirements for the Nigerian banks could constrain loan growth in a bid to conserve capital.

Excess capital on the banks’ books could also be negative for return on equity (RoE), given the elevated equity base it could create. It could also affect the banks’ dividend payout policies.

By having extremely stringent liquidity requirements skewed towards short tenured instruments, the banks might shift away from longer-term interest earning assets with higher yields, thereby putting further pressure on margins.

“Basel III however presents the opportunity for banks to galvanise their non interest revenues (NIR) generation capabilities and focus on capital light businesses to drive profitability. In our view, the banks best placed for Basel III are those that already meet the necessary requirements, and those with earnings diversification strategies i.e. holdcos with non-banking subsidiaries,” Solanke said.