Guaranty Trust Bank (GTB) stock has soared by 26 percent in the past one-month alone which has helped propel the tier-one financials market capitalisation to N1.124 trillion.

GTB’s market cap is now greater than the entire universe of listed Tier-2 lenders a signal that we are either at a new level of multiple expansion or for tier-one financials or it may be time to take some profits. 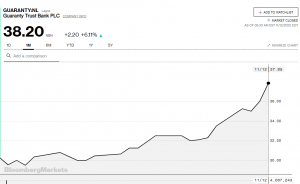 This is eclipsed by the N1.124 trillion market capitalization of GTB. The tier-one lender has benefitted from the rotation from fixed income securities into equities by investors fleeing rock bottom yields which are surely giving Pension Fund managers and Insurance firms sleepless nights.

With a wall of liquidity fleeing bonds looking for an outlet, GTB’s highly liquid shares and high daily traded volumes and value means the lender is an obvious choice for investors.

GTB stock may however be nearing overbought territory (it is the largest listed financial), with the price to book value trading richly at 1.5 times and dividend yield dropping to 7.33 percent from double digit levels just last month.

Most of the Tier-2 lenders trade at a much lower valuation ranging between 0.33x book value for Fidelity Bank and 0.77x for Union Bank. Stanbic IBTC is an exception as it trades at 1.42 times book value.