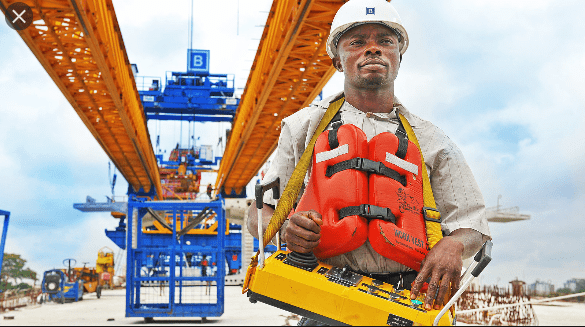 The Chief of Staff to the President, Professor Ibrahim Gambari, on behalf of President Muhammadu Buhari, led a federal Government delegation to inspect the 2nd River Niger Bridge that is being constructed by Julius Berger Nigeria Plc on Tuesday, 8 March 2022.

The Managing Director of the Nigerian Sovereign Investment Authority (NSIA), Uche Orji was also in the entourage of the Chief of Staff to the President.

The inspection visit commenced at the Owerri interchange end of the project, where the Managing Director of Julius Berger Nigeria Plc, Engr. Dr. Lars Richter made a presentation to the Chief of Staff on the progress of the ongoing works.

Richter spoke of Julius Berger’s introduction and implementation of innovative solutions for soil improvement using the Geotextile Encased Sand Columns (GEC) system for base reinforcement. The innovation, Richter said, is a foundation method for embankments on ground with low bearing capacity. It also consists of mega Prefabricated Vertical Drains (PVD), which speed up the settlement and consolidation process, in which settlement happens within the construction period.

Richter significantly put progress so far achieved on the Second River Niger Bridge works at 83% as at February 2022. Status of the works as presented showed that the substructure of the Bridge is completed, while its superstructure and finishing works are in steady progress. Secondary bridges are also completed. Richter also pointed the visitors to ongoing culverts and drainage works.

Julius Berger, in conformity with its impeccable adherence to safety on site, also held a Safety brief for the important visitors prior to walking the full length of the constructed bridge where finishing works are still ongoing. Other company officials, including Engr. Friedrich Wieser, the Project Director for the 2nd River Niger Bridge, accompanied the Managing Director.

All things being equal, the second River Niger Bridge project is scheduled for commissioning by October this year. The bridge aims to minimize traffic congestion on the old bridge and to strengthen connectivity in the entire region. The project, which is being funded by the Nigerian Sovereign Investment Authority through the Presidential Infrastructure Development Fund, is expected to boost economic activities and open up development in the southeastern part of the country.

The project involves the construction of a 1.6km bridge over the River Niger, scheduled for completion in August 2022, construction of two secondary bridges at CH25+166 (Amakom Village Road) and CH28+304 (Atani Road) spanning 21.7m each, which have now been completed.

It also involves demolition of an existing flyover and construction of a new interchange at CH34+100 (Onitsha-Owerri Road), scheduled for completion in August 2022. The project also consists of the construction of a 3.3km approach road on the Asaba end and 7.0km approach road on the Onitsha end of the main bridge, scheduled for completion in October 2022.

There is also a toll plaza at CH25+700 consisting of 8 lanes in each direction, scheduled for completion in October 2022, and Site clearing of the Right of Way (RoW) including the removal of all bush, trees and shrubs.

The second River Niger Bridge, when commissioned, will deliver huge socio-economic benefits for the nation, particularly the surrounding states, by improving commercial activities, enhancing traffic flow as well as road safety for commuters.