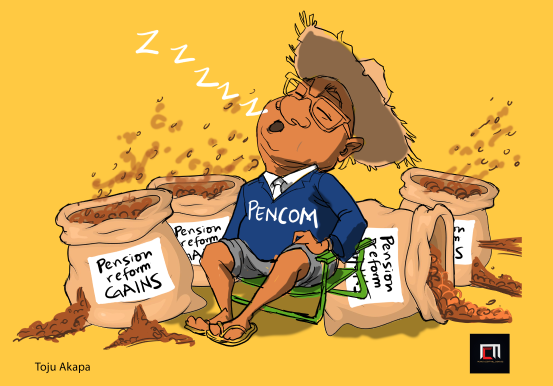 Kehinde Akintola (real name) worked for 12 years with a Lagos based business media company that consistently failed to remit Pensions to his pension Fund Administrator (PFA), which were deducted monthly from his salary.

Four years after being laid off by the firm, Akintola is still being owed millions of naira, while the regulator, National Pensions Commission or PENCOM is feigning ignorance or helplessness about intervening in the matter despite several petitions written to it.

“For 12 years of my sojourn with the company less than N300,000 has been paid so far. It is so pathetic,” Akintola told MoneyCentral.

“I had petitioned the chairman of PENCOM about its laws being broken by the firm, but unfortunately the Publisher replied and lied that he is up to date in remittance,” Akintola said.

Negative real investment rates of returns, lack of leadership from PENCOM to sanction erring employers who fall afoul of its laws, inability of contributors to track PFA performance in one easy dashboard and move funds from failing PFAs, guaranteed fees to PFAs despite poor returns and a dearth of investible asset classes, are some of the numerous issues facing Nigeria’s pensions industry.

Millions of Nigerian contributors are probably unaware of some very uncomfortable news about their nest eggs, including the fact that many employers routinely refuse to remit funds deducted from their salaries, as well as after-fee investment returns that are being gradually eroded by inflation.

PENCOM’s mission statement says it “exists for the effective regulation and supervision of the Nigerian Pension Industry to ensure that retirement benefits are paid as and when due.”

Six years into President Muhammadu Buhari’s administration however, the leadership at PENCOM which operated under an Acting Director General, Aisha Dahir-Umar for 3 years, 2017 – 2020, (before being confirmed last year), has been largely uninspiring.

MoneyCentral’s investigations show many employers have been getting away with deducting Pension contributions from workers’ salaries and not remitting same, and even when they do remit after years of default, fail to be held accountable by PENCOM to pay penalties (interest) on withheld funds as required by law.

Another issue market sources have complained about to MoneyCentral is the lack of innovation at PENCOM.

“The current arrangement is very good for PENCOM top management and their careers. So they micromanage the industry,” a market source working in a PFA told MoneyCentral on condition of anonymity.

“PENCOM won’t even open up a 5% offshore allowance for investing assets. That’s as basic as it gets in asset allocation and efficient frontiers.”

The main functions of the PFA’s are to open Retirement Savings Account (RSA) for employees; invest and manage pension fund assets; payment of retirement benefits and accounting for all transactions relating to the pension funds under their management.

The pension’s industry had net asset value of N12.29 trillion as at November 2020, meaning contributors will pay over N100 billion in fees to the 24 PFAs in 2020, according to MoneyCentral’s calculations.

MoneyCentral’s analysis of available PENCOM and industry data shows 16 of the PFAs for which data is available earned a total of N35 billion in profits from N88.9 billion in revenues.

In other words, the PFAs are extremely profitable, haven been bestowed with guaranteed profits by regulations guiding their operations.

Stanbic IBTC Pension Managers Limited (the largest in the industry controlling 37% of total Pension Assets as at December 2019), for instance had a 49.5 percent profit margin for its 2019 operations, after earning N20 billion profits on N40.37 billion in revenues.

However, the profits earned are largely decoupled from performance by the PFAs. Stanbic IBTC’s 3 major funds all underperformed inflation in 2018.

The 3 year rolling average (2017 – 2019) for Stanbic Pensions for which there is available data, shows its RSA II fund returned 11.88 percent, while RSA fund IV returned 14.64 percent in that time period.

With net inflows of pension contributions amounting to an average of N80 billion a month, Pension Fund Administrators (PFA’s) are able to attract assets under management (AuM) and as a result charge fees without having to do much advertising of their fund performance to contributors or do much explaining when performance is woeful like it was in 2018 and for most of the past five years (on an inflation adjusted basis).

In 2020 as Nigerian stocks rallied by 50 percent (to become the best performing market in the globe), Nigerian Pension Fund Administrators (PFAs) were still largely underweight equities.

Nigerian Pension Funds increased their holdings of domestic equities by 35 percent in the 2 months’ period between September and November 2020, to N790 billion from N585.76 billion, according to the latest data from regulator PENCOM.

However even that belated increase in exposure to equities still left PFA assets under management invested in equities (N790 billion) equivalent to only 6.5 percent of total pension assets of N12.29 trillion (November 2020).

The reverse is the case in most other parts of the world where Pension funds typically allocate an almost even amount to equities and bonds.

Real investment rates of return of pension funds exceeded 5 percent in 29 out of 46 jurisdictions in 2019, even exceeding 10 percent in 13 of them including the United States (10.1%), according to an OECD report on global Pension Funds.

“The strong investment performance in 2019 is probably the result of recovering financial markets, bouncing back after heavy losses in the last quarter of 2018. Major stock market indices recorded higher levels at the end of 2019 than at the end of 2018,” the OECD report said.

Nigerian Pension Fund Managers are not entirely to blame for the state of affairs, even if the lack of competition for funds and guaranteed fees don’t offer them an incentive to outperform inflation or a given benchmark.

Pension assets in Africa’s largest economy have surged from N265 billion or about 1.4 percent of Gross Domestic Product (GDP) in 2006 to today’s level, equivalent to 8.7 percent of GDP.

Assets are currently growing at $2 billion a year, or roughly 0.5 percent of GDP, per annum. The explosive growth in pension assets means that fund managers are increasingly chasing the same few stocks, bonds and treasury bills that are currently available as investment options.

Dangote Cement and the large banks and Telco’s (MTN and Airtel) make up about 70 percent of stock market capitalisation, while avenues to invest in infrastructure bonds, private equity, commodities and real-estate investment trusts are limited to nonexistent.

The regulator PENCOM meanwhile has not offered any meaningful reforms that will give retirement savings contributors access to invest in dollar denominated assets.

“In the past 20 years the S&P 500 has had one of its historic return periods, and Nigerian pension funds totally missed it,” said a second market source MoneyCentral spoke to.

Pension Fund Administrator who binged on fixed income securities in the past are finding themselves having a hard time generating alpha as hitherto double digit yields normalise.

Yields on benchmark 10-year bonds due 2022 are down from 17 percent in 2015 to 2.45 percent today. In 2007, when equity prices were rising rapidly, 30 percent of pension fund assets were in equities, today the exposure is less than 7 percent.

PENCOM should see this as a problem because equities are typically the best hedge against inflation. However, the low free float in most listed Nigerian stocks suggests that a modest movement by PFAs towards increased equities allocation would have an outsized impact on stock prices.

This should encourage PENCOM to open up a little window for investments into foreign stocks. Today only one closed Pension Fund Administrator (CPFA) has exposure to foreign equities (a legacy from before the Pension Reform Act of 2004).

This is an investment window that should be open to all Nigerian PFA’s. PENCOM can look to Australia which has the world’s fourth-largest pension system, and also in the midst of reforming its Pension industry for inspiration.

As part of a package of proposed reforms, the Australian government wants to force pension funds that don’t meet key after-fee investment return milestones to inform their customers and explain their failure.

Additionally, they would have to let pension contributors know about other competing PFA’s where they can move their funds to, who are performing better than them.

The Australian set of reforms aims to prevent disengaged contributors from getting stuck with sub-par PFAs, similar to the problems facing the Nigerian industry.

Australian regulators will also have the power to close pension funds to new intake of clients/contributors funds if set performance targets are missed by more than 50 basis points for a second time. They can close funds entirely ultimately, if things don’t improve.

Analysts say PENCOM must improve its regulatory and enforcement arm to protect Nigerian workers already being buffeted on all sides by low wages and inflation.

Firms engaged in the worst violations of employer rights must be brought to book by PENCOM to engender confidence in the system. Many firms are also actively violating rules that bar those not in compliance from receiving contracts from Government agencies.

PENCOM must crack down on firms engaged in these practices, in conjunction with the appropriate anti-corruption agencies like EFCC, sources say.

PFA’s administrative fees, investment fees, and other charges should also be reduced or at worst linked to performance benchmarks to protect pension contributor’s funds. Nigeria’s pensions scheme today has only 9.1 million people (11 percent of the labor force) contributing to it with a wall of liquidity sitting in bank accounts outside of pension assets.

Some industry insiders worry that as PENCOM moves to bring the informal sector into the pension scheme, some of that liquidity in the banks will hit the system further amid a dearth of investible assets.

Following PENCOM’s launch of the Micro Pension Plan (MPP) in March 2019, the Registration for the MPP commenced with the RSA Registration count for participants standing at 39,686 as at 31 December, 2019.

The consensus opinion by insiders and stakeholders who MoneyCentral interviewed for this story was that PENCOM needs to adopt new reforms and innovation for an industry that largely living on its past glory.

“If pension funds can’t beat inflation, how much more the certain 50-100% devaluation of the naira every 5 or 8 years,” a third fund manager said.