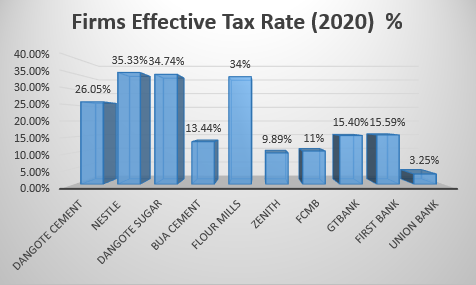 Nigerian manufacturing firms who have to operate in an environment of inadequate power supply, poor logistics infrastructure and foreign exchange shortages are also on average paying double the tax rate paid by their peers in the financial services industry.

In a blow to the real sector, MoneyCentral’s analysis of financial data of 21 large firms comprising 10 manufacturers and 11 banks shows the trend of much lower effective tax rates for financials compared to the real sector operators.

For instance, a comparison between the largest manufacturing firm in Nigeria today Dangote Cement and the largest bank by profits Zenith Bank, shows some stark differences.

The eleven banks paid a total of N123.3 billion in taxes even though they are much more profitable than the 10 manufacturing firms who paid a combined N157.17 billion in taxes in 2020, according to MoneyCentral’s calculations.

The total combined profit before taxes (PBT) for the 11 financial firms came in at N1.005 trillion, compared to N569.8 billion in PBT for the 10 manufacturing firms.

Why the anomaly of higher taxes for manufacturers?

Nigeria’s effective tax rate for most corporations is at 32 percent (including education tax).

The banks however are not entirely to blame for the anomaly of having much lower effective tax rates as Nigeria’s tax laws have numerous loopholes through which firms can lawfully avoid paying the maximum tax rate.

For banks, interest earned on Federal government debt securities such as treasury bills and bonds are tax free, as well as for State government debt and corporate bonds, according to a tax exemption issued in 2011.

The tax exemption was granted for a period of 10 years, with the exception of Bonds issued by the Federal Government, which shall continue to enjoy such exemptions.

Government probably put in place the exemptions 10 years ago to enable the growth of Nigeria’s debt markets.

Nigeria’s Federal Government which is struggling with a narrow revenue and tax base may need to undertake a cost benefit analysis on the portfolio investor friendly tax breaks compared to the need to improve its tax earnings, and support the real sector, especially since Nigeria’s debt markets have grown spectacularly since 2011.

A slump in demand caused by rising cost of living and a slow economic recovery that damped consumer spending has led to an inventory-pile in the warehouses of manufacturers, keeping profit margins under pressure.

It is taking manufacturers a ridiculous amount of time to sell and replace inventory as there is low patronage for products.

For instance, the average investor turnover ratio of the largest manufacturers in Africa’s largest economy stood at 4.21, which indicates that they sell their entire goods within a 86.62-day period, according to MoneyCentral Calculations.

Inventory turnover is the rate at which a company replaces inventory in a given period due to sales.

The inventory of unsold goods also stemmed from the devastating effect of the coronavirus pandemic that disrupted the demand and supply side of the market, tipping the country into its second recession in less than six years in 2020.

Of course, manufacturers’ earnings will be beaten down in a country where over 50 percent of a population of 200 million live on less than $1.90 a day, while inflationary pressures continue to erode the purchasing powers of consumers.

“If their warehouses remain full due to low demand, the manufacturing activities will contract and their suppliers will suffer. Consequently, they may downsize or shrink their workforce to stay afloat,” said Johnson Chukwu, managing director and CEO of Cowry Asset Management Limited.

Chukwu said the government could stimulate consumption by engaging in capital projects or construction activities to spur jobs.

Jobless rate in Nigeria rose to 33 percent in the three months through December 2020, according to the recent data from the National Bureau of Statistics (NBS). That’s up from 27.1 percent in the second quarter of 2020, the last period for which the agency released labor-force statistics.

Nigeria’s annual inflation rose 0.72 percentage points to 17.3 percent in January from a month earlier, its 17th monthly increase, according to the statistics body.

There are indications the price of premium motor spirit popularly known as petrol will be hiked as the Nigerian National Petroleum Corporation (NNPC) has hinted that the N120 billion subsidy is no longer sustainable.

A further hike in petrol price and electricity tariff are bad omen for manufacturers as household income will be pressured.

Total inventories in the balance sheet of the largest listed manufactures stood at N487.92 billion as at December 2020, that is 5.66 percent higher than 2019’s N461.79 billion, according to data gathered by MoneyCentral

Unilever Nigeria recorded an inventory turnover ratio of 3.81 in December 2020, which means it sold its entire inventory in 95 day- period as it posted a loss of N1.59 billion.

Nestle Nigeria, the largest consumer goods firm by market capitalization has a turnover ratio of 3.93, as it takes the consumer goods giant 92-day period to sell an entire inventory.

Interestingly, Guinness Nigeria has an inventory turnover ratio of 2.43 as at December 2020, that indicates it takes the beer maker 150.35-day period to sell the entire inventory.

“The increase in inventory in the period was attributed to the general low consumption and renewed imports in the economy as global economies generally open after months of lockdown,” said Manufacturers Association of Nigeria, (MAN), in its executive summary of the economic review of the second half of 2020.

“Electrical and Electronic sectoral groups  accounted for over 33 percent of total inventory of unsold manufactured products in the period.  The group are having the challenges of low patronage, high smuggling and products counterfeiting which rubbed-off negatively on inventory, said the body.”

According to MAN’s calculations, Inventory of unsold manufactured goods in the sector totaled N577.61 billion in 2020 as against N402.42 billion recorded in 2019.

Analysts say a marginal increase in economic activity on the back of increased pace of vaccination will improve household income, and they added that companies need magnified patronage to break even and deliver the desired returns in form of bumper dividend and share appreciation.

The adoption of a flexible foreign exchange and copious investment in infrastructure will help unlock potentials in the real sector.

Between 2019 and 2020, manufacturers had spent about N143.29 billion on alternative power supply, according to MAN.