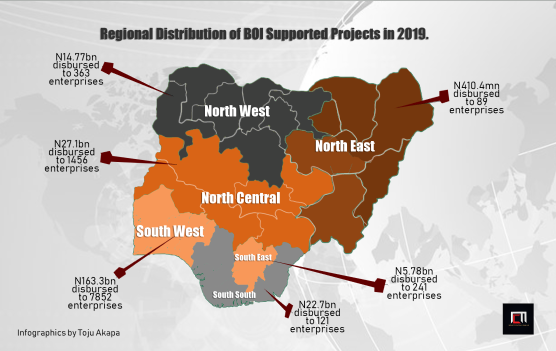 Two recessions over a five-year period has left a lot of Nigerian businesses needing unprecedented government support which has allowed more struggling companies to borrow at lower rates than ever before through development finance institutions like the Bank of Industry (BOI).

Yet amid the boom in cheap credit, smaller firms in states outside Lagos that can help reduce regional inequality in Nigeria are often being shut out, unable to access the BOI funds.

By virtue of its mandate to support industrialisation, BOI typically supports enterprises that are focused on the creation of secondary or intermediate products which have significantly more value.

In the most recent year under review for which there is available data (2019), the Bank of Industry disbursed a total of N234 billion to 10,145 enterprises, which it said facilitated the creation of an estimated 1 million direct and indirect jobs.

About 70 percent of the N234bn in funding however, went to states in the South West of Nigeria (with Lagos dominant), equivalent to 77 percent of all enterprises it assisted with lower interest loans for the period.

The Bank of Industry uses its large balance sheet and its ability to access cheaper funding from overseas and the Central Bank of Nigeria (CBN) intervention funds to aid Nigerian businesses, especially manufacturers and large, medium scale enterprises, as well as SME’s.

In 2020, the Bank got a CBN guarantee and was able to borrow Euros 1 billion (One Billion Euros) through a syndication by International Banks led by AFREXIM Bank, Credit Suisse, Rand Merchant Bank and Sumitomo Mitsui Banking Corporation as Co-Lead Arrangers, Book runners and Underwriters, for on lending to SMES in Nigeria to create jobs.

In the 2019 financial year, Fitch revised the outlook on the Long-Term Issuer Default Ratings (IDR) of the BOI to negative from stable, primarily due to the outlook of the sovereign.

However, the Bank’s Issuer Default Rating was reaffirmed at ‘B+’. Fitch stated that a key factor in the Bank’s credit rating is its funding, which is long-term and sourced from the Central Bank of Nigeria and leading multilateral development banks.

Its mandate includes the provision of financial assistance for the establishment of large, medium and small projects as well as expansion, diversification and modernization of existing enterprises; and rehabilitation of ailing industries.

Authorized share capital for the BOI was initially set at N50 billion and in 2001 it was later increased to N250 billion in order to put the Bank in a better position to be in tune with the nation’s rising economic profile and in line with its mandate.

The BOI has helped high profile companies from All-On Energy, and Wemy Industries Limited, engaged in the production of personal care products, to Filmhouse Cinemas and Main One, access cheap financing.

The Group’s Cumulative Risk Assets from 55 Active Accounts for large firms as at March 26, 2020, stood at N46.06 billion, according to data from its financial statement seen by MoneyCentral.

But for small and large companies outside of the Business hubs of Lagos and Abuja, the numbers show that it is largely difficult to access the BOI loans.

While the BOI has a physical presence in 27 of Nigeria’s 36 states (including Abuja the capital), a survey undertaken by MoneyCentral on businesses in Onitsha a large manufacturing, trading and business hub in Eastern Nigeria shows majority of respondents having a lack of knowledge about how to access BOI loans and low recognition about the operations of the BOI.

Businesses in the SouthEast region as a whole for instance received only 2.4 percent of loans disbursed by the BOI in 2019.

Commercial banks who the BOI often partners with for on-lending are also tightening loan conditions to smaller firms and may be pulling back on pushing BOI intervention funds, preferring to market their own in house loans instead, banking sources tell MoneyCentral.

The outstanding balance on Zenith Bank’s (one of Nigeria’s biggest banks by assets) Bank of Industry (BOI) intervention loan, fell by 11.1 percent between September 2019 and September 2020.

A lack of credit for small and medium-sized firms outside Lagos and Abuja is partly responsible for the poverty and lack of jobs in those locations amid the coronavirus pandemic’s growing economic wreckage.

Lagos and Abuja were largely built with massive Federal investments, and have relatively superior transport and other infrastructure, like schools, hospitals, malls, housing, municipal services, and so on and thus are often a magnet for private businesses/capital and jobs that come with it.

The two cities (Lagos,Abuja) located in the South West (SW) and North Central (NC) regions of Nigeria, have also managed to positively influence adjacent states like Ogun or Nasarawa.

However, beyond these two cities, large swathes of the country especially those in far flung regions (North East, North West, South South and to some extent the South East), away from the economic activities generated by Lagos and Abuja, often find themselves mired in poverty and unemployment.

Most of these regions with little or no Federal investments on the scale of Lagos or Abuja are often plagued by militancy (SS), Insurgency (NE), Insecurity/restiveness (SE), and Kidnappings (NW).

In that sense the BOI should focus more attention to disadvantaged regions of Nigeria for its loan programs.

Nigeria’s GDP is forecast to expand at the slowest rate this year (after negative growth in 2020), when compared to other major Emerging Markets (EM) and developing economies, according to International Monetary Fund (IMF) forecasts, with regional economies across the country bearing most of the brunt.

The BOI, according to its Managing Director/Chief Executive Officer, Olukayode Pitan, says it: “intends to re-dedicate efforts in supporting entrepreneurship and industrialisation in Nigeria, through the provision of affordable and convenient financing opportunities that will guarantee comparative advantage for Nigerian businesses in the face of changing regional and global market trends.”

For many Nigerian firms BOI intervention is critical to survival, as inability to access financing is often a major issue SMEs face in the country.

The BOIs intervention funds have been commended for helping to save some manufacturing jobs in Nigeria over the past 5 years when a double recession and foreign exchange (FX) scarcity hit the sector and firms hard.

But even as some are lucky enough to benefit from BOI intervention – those in Lagos, Abuja and its environs – other parts of the economy are clearly benefiting much less, a disparity that mirrors the broader inequality problems facing Nigeria, also being worsened by the coronavirus pandemic.

The Bank of Industry (BOI) can do more to reach firms operating in States and regions most in need of financing such as the North East (NE), South East (SE), North West (NW) and South South(SS) so that potential borrowers can become more familiar with their loan programs.

It can improve visibility for its operations (and loan programs) by having branches in the commercial hubs of states in which it has a physical office presence.

In Anambra and Abia states for example, BOI offices are located in the state capitals of Awka and Umuahia, as opposed to the commercial cities of Onitsha and Aba.

Even as loan values (in Naira) may not match those given out to enterprises in Lagos (South West) and Abuja (North Central), the BOI can aim to grow loan volumes (number of enterprises receiving loans) in underserved states and regions.

The BOI should also engage more with banks, whom they often partner with to provide the on-lending of BOI financing to small and mid-size firms, to inform customers in the various regions about the availability of BOI loans.

It can also streamline its loan application process to make it faster, less complex, and more accessible.