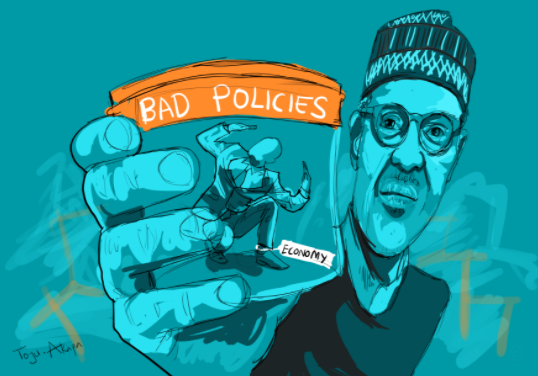 …in double-digit territory since May 2015

In May 2021, inflation data reported by the National Bureau of Statistics (NBS) showed that the food inflation rate in May was 22.28 percent, making it the 72nd consecutive month that inflation had remained at double-digit in the country.

The current presidential administration has seen nearly an endless list of bad economic statistics labelled at them but none has been more glaring than this as food inflation jumped to double digit in June 2015 (President Buhari’s first full month as President) and stayed there for the last six years.

Prior to President Buhari’s swearing in as President of the Federal Republic of Nigeria in May 2015, food inflation had stayed at single digit for 22 consecutive months.

Analysts say a combination of avoidable events have caused food prices to rise astronomically in the last 6 years.

Food prices have soared in the country owing to farmer-herdsmen conflict in the North, the import ban on 41 items by the Central Bank of Nigeria of which several were food products, the boko haram crisis in the North which is the food production hub of the country, the Federal Government’s decision to close the border to its neighbours thereby blocking importation of cheaper food products and the highly volatile exchange rate in Nigeria are all responsible for the rapid rise in food prices in the country.

The galloping inflation hitting food prices in the country is another grave challenge Nigerians have to deal amongst several other socioeconomic challenges grappling the country today.

Over 86.8 million Nigerians living under the poverty line in the country are forced to go to the markets every month wondering if the little money they were able to generate will be able to still feed their families at least 1 square meal a day.

Agricultural policies by CBN to boost production and demand for locally made agricultural products seem to have achieved very little in terms of managing the cost of food in the country.

Average year on year inflation in the last 72 months in the country is 15.64 percent which is incredibly high for a country where average income of households is growing at less than 1 percent every year.