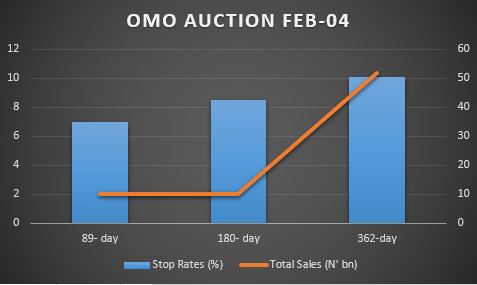 Yields on Open Market Operation (OMO) bills at a Central Bank of Nigeria (CBN) auction held yesterday (Feb 04) crept higher as the apex regulator seeks to re-ignite a carry trade that has all but disappeared in Africa’s largest economy’s fixed income market.

“This is a signal of FX pressure,” a bond trader told MoneyCentral. “The CBN is trying to attract foreign portfolio investors (FPIs) to bring in dollars.”

OMOs, which typically have maturities of less than a year, were originally used by the central bank to control liquidity and mainly bought by local lenders.

But they have been opened to others in the past couple of years to bring in hard currency needed to keep the naira from depreciating, becoming the main instrument for foreign carry traders.

A carry trade is a trading strategy that involves borrowing at a low-interest rate and investing in an asset that provides a higher rate of return.

Global investors had been attracted to naira bonds which yielded as high as 15 percent two years ago and a relatively stable currency then, making the Nigerian carry trade one of the most lucrative in emerging markets that year.

All that evaporated with the onset of the coronavirus pandemic in January 2020, which led to foreign portfolio investors not re-investing their maturing OMO bills for fear of a scarcity of dollars and devaluation that happened in March 2020.

Yields on OMOs had also collapsed following the CBNs move to get lenders to fund real sector development via a minimum level of loan to deposit ratio (LDR) set at 65 percent, with penalties of cash reserve ratio (CRR) debits for defaulting banks.

The CBN has seen its dollar reserves creep up to $36.1 billion as at February 01, the highest levels in 7 months (since July 16, 2020), according to MoneyCentral’s analysis of CBN data.

Backlogs of foreign exchange (FX) have however begun to build up again since the reopening of the economy in June last year, following the coronavirus lockdowns, according to Razia Khan, Africa economist at Standard Chartered Bank.

“Portfolio investors and carry traders won’t come back in a big way to Nigeria with inflation high and non-smooth functioning yet of the FX market,” Khan said.

The steady rise in OMO yields will have limited impact on the Nigerian Treasury Bills market where yields are much lower, and equities which rose 50 percent in 2020, said the bond trader.

“Even so, the equity market is very ripe for profit taking,” he said.

Nigerian Vice President Yemi Osinbajo has in an unprecedented move disavowed a lot of the policies being spearheaded by the country’s powerful Central Bank...
Read more