Nigerian Banks can Increase Shareholder Value by Improving on Efficiency 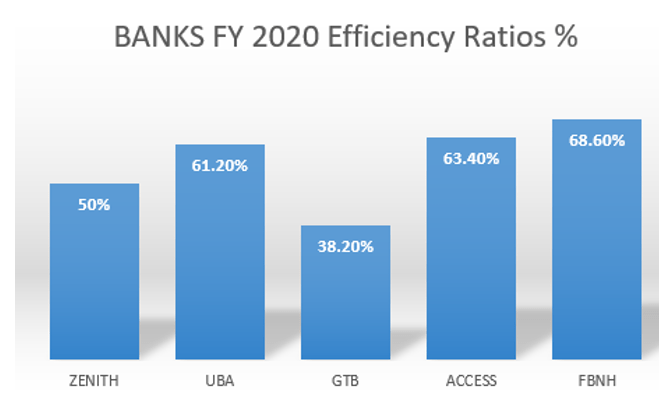 The current thinking in many Nigerian Banks is that there is a lot to be had by expanding outside the shores of the country on the rest of the African continent and beyond.

Certainly that strategy has been successful for a few Nigerian Banks after a lot of hard work over the past decade, chief of which is United Bank of Africa (UBA), which operates in some 22 African countries.

However, there is a strategy closer to home for most banks seeking to increase shareholder value and grow earnings, that does not entail sexy Merger and Acquisition (M&A) deals.

It would entail working hard to improve efficiencies across board and seeking to bring down elevated cost to income ratios below the 50 percent mark.

The ratio, which measures operating expense as a percentage of operating income, is used to gauge efficiency and productivity for banks.

The lower ratio the better and it indicates more profitability of banks. Data from the FY 2020 financials of the 5 largest banks shows the cost to income ratios as seen in our chart of the week.

To be fair there are some regulatory reasons for high bank costs such as the AMCON charge, and NDIC debits, but clearly banks can also do much more internally to reduce costs.

The data shows most of the banks could do with better efficiency ratios, with the best performer being GTBank.

Investors usually reward banks with higher efficiency with a higher valuation, hence it is no surprise that GTBank is the most expensive bank among the group, sporting a price to book ratio of 1.14X.

Banks should see the recent happenings in the Nigerian Fintech space as a motivation to innovate. With investors slapping valuations exceeding $1 billion for a couple of Fintech names less than 10 years of operations, firms like Flutter wave are effectively much bigger than most Nigerian Banks.

That is a clear message of reward for innovation which the market is sending.