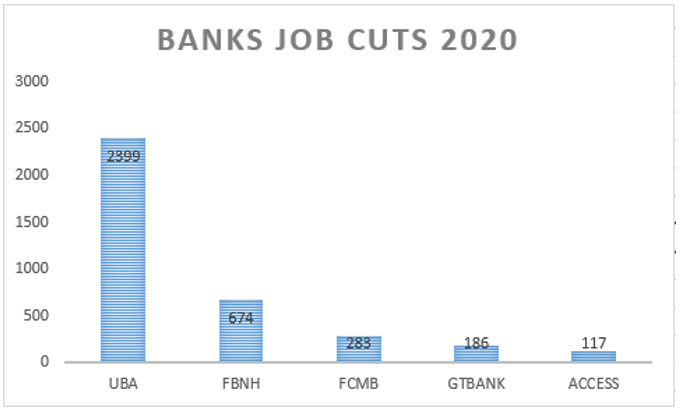 Nigerian banks cut over 3,000 jobs last year, one of the biggest deepest job losses for the sector in the past 5-years as the coronavirus pandemic and a growing shift to digital channels, impacted the sector negatively.

Lenders from United Bank for Africa (UBA), to FBN Holdings and FCMB led the gross job losses in the sector to a combined 3,350, according to MoneyCentral’s analysis of the 2020 audited financial statements of 11 major banks that have available data on their personnel.

UBA laid off the most workers last year with its headcount down by 2,399 people at the end of December 2020.

Surprisingly some banks are adding jobs despite the tough operating environment in Nigeria.

Fidelity Banks personnel count increased by 141 people in 2020, followed by Zenith Bank which added 139 people to its headcount last year, and Jaiz bank which added 47 staff.

The pandemic and subsequent lockdowns imposed by the Nigerian government led to a collapse in economic activity, and the ability of customers to physically visit a bank branch, helping to accelerate a shift into electronic banking that had already begun.

Nigeria’s economy contracted by 1.93 percent in 2020, according to National Bureau of Statistics (NBS) data.

Banks faced with a raft of regulatory actions over the past 2 years, including elevated cash reserve ratios and a curb in fees, that served to reduce profitability have been looking to cut costs as a way to remain profitable.

Despite this only 2 of the 5 major lenders maintained a cost-to-income ratio at 50 percent or below, suggesting more job cuts may be in store this year.

The ratio, which measures operating expense as a percentage of operating income, is used to gauge efficiency and productivity for banks. Lower ratios generally indicate higher efficiency.

Overall, despite the job culls, UBA still had the largest headcount for Nigerian banks at 10,838 at the end of December 2020.