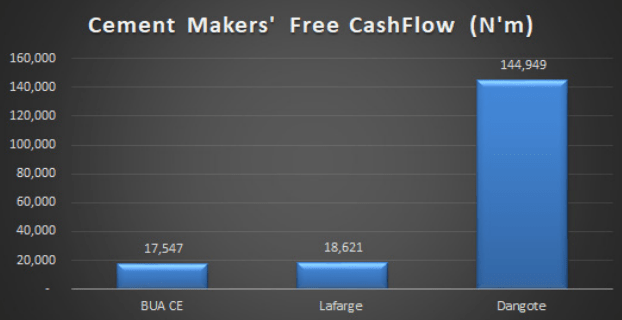 Nigeria’s largest cement producers have more cash than they know how to spend it, and of course, a strong balance sheet provides them the firepower to ward off any macroeconomic headwinds.

The combined net cash from operating activities of the three dominant players in the Industry-Dangote Cement Plc, Lafarge Africa, and BUA Cement- spiked by 50.63 percent to N294.91 billion in March 2021 from N195.77 billion as at March 2020, according to data gathered by MoneyCentral.

The cumulative free cash flow (after capital expenditure spending has been removed) surged by 381.10 percent to N181.17 billion as at March 2021.

A breakdown of the figure shows Dangote Cement, the largest company by market capitalization in Africa’s largest economy, saw free cash flow surge by 530 percent to N144.95 billion as at March 2021.

The marked improvement in net cash from operation was largely due to excellent working capital management and a reduction in capital expenditure spend, as the gradual reopening of the economy underpinned construction activities that helped spur earnings growth.

A cash pile provides sufficient funds for companies to honour both short- and long-term obligations to creditors, magnify the earnings of owners by way of steady dividend payment, and pursue expansion plans such as making an inroad into other countries and acquiring entities.

Managers of these cement manufacturers have opted for balance sheet conservatism and returns to shareholders as a low interest rate environment is paving the way for them to tap into the debt market to fund their fund expansion plans.

Just like the biblical Egypt that saved grains in the time of bountiful harvest anticipation of a looming period of famine as envisioned by Joseph the dreamer, cement makers are probably piling cash incase interest rates start to rise and borrowing becomes expensive.

It is not only managers of cement makers that hoard cash.

Warren Buffet, the billionaire investor, and Chairman Berkshire Hathaway, a conglomerate with interest in Insurance, private equity, real estate, apparel, utility sectors, does not pay dividends to shareholders. This is as the conglomerate has a stable earnings stream.

Instead, Buffet chooses to reinvest retained earnings into new projects, investments, and acquisition. And the strategy has been paying off over four decades as investors have been receiving a high return in form of share appreciation.

The owners of the largest cement companies seem to be emulating the Oracle of Omaha (as Buffet is fondly called) as they have been investing in various projects across the continent while setting up plants in Nigeria in pursuant of the government’s backward integration programme.

Dangote cement will ramp up capacity by more than a third to meet Nigeria’s burgeoning demand as the economy recovers.

The company is reactivating idle capacity at its Gboko plant, in Benue state, because of a 40 percent increase in demand in Africa’s largest economy, in the past seven months, said Devakumar.

BUA Cement is helping to reduce the country’s import bills by investing in production capacity, creating jobs and adding impetus to economic growth.

To counter the lack of domestic production, the company has invested over $2 billion into its cement business over the last four years, which has helped to boost the company’s output.

“In January 2019 we commissioned a new line which produces 3m tons of cement, which pushed our total up to 8m tons,” said Abdulsamad Rabiu, chairman BUA Group.

The average operating cash flow margin increased to 73.98 percent in March 2021 from 57.73 percent the previous year, according to data gathered by MoneyCentral.

An increase in cash margin means a company is efficient in converting sales to cash, an indicator of good earnings qualities.