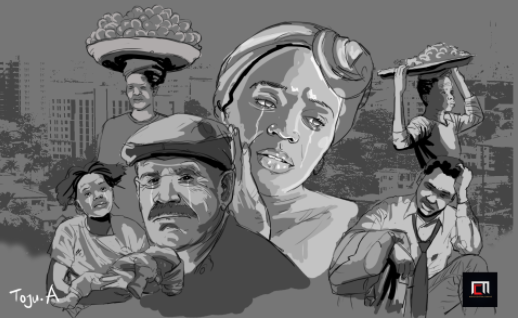 It’s been a long 6-years for long suffering Nigerians who have seen it all in the form of rising inflation, two recessions and an unemployment rate at the highest levels on record.

This is taking place against a backdrop of rising insecurity which makes it more difficult to attract the private sector investments needed to create jobs to most parts of the country, outside Lagos.

The unemployment rate in Nigeria rose to 33.3 percent in the fourth quarter (Q4) of 2020, according to a report published by the National Bureau of Statistics (NBS) last Monday.

That’s up from 27.1 percent in the second quarter of 2020, the last period for which the agency released labor-force statistics.

Nigeria’s unemployment rate has more than quadrupled over the last six years as the economy went through two recessions, overshadowing efforts by the President Muhammadu Buhari’s administration to create jobs.

Meanwhile, Nigeria’s annual inflation rose to 17.33 percent in February from 16.47 percent in January, the National Bureau of Statistics (NBS) said on Tuesday.

Fitch Ratings while on Friday affirming Nigeria’s Long-Term Foreign-Currency Issuer Default Rating (IDR) at ‘B’ with a Stable Outlook, noted that the rating was being constrained by weak fiscal revenue, low governance and development indicators, high dependence on hydrocarbons and continued weak growth and high inflation.

Nigeria’s Federal Government headed by President Muhammadu Buhari has more than doubled the Federal debt since it came to power some 6-years ago, without much impact on the citizens.

Data obtained from budget documents by MoneyCentral, shows that between 2015 and 2020 Nigeria generated an estimated revenue of around N21.9 trillion but spent an estimated N40.1 trillion in hope that it will spur a strong economic growth.

Total Government debt will rise to 32.6 percent of gross domestic product (GDP) in 2022, from less than 13 percent a decade earlier, according to data from Fitch.

The key challenge to debt sustainability stems from low scale revenue, with the total Government debt-to-revenue ratio forecast by Fitch to rise to 395 percent in 2022.

“Debt interest cost will consume 24 percent of revenue in 2022, against a ‘B’ median of 11%. The picture is much weaker at the federal government (FGN) level, with forecast debt-to-revenue and interest-to revenue ratios of 1,031% and 64%, respectively, in 2022,” Fitch said in its note.

Over the last 6 years Nigeria has suffered 2 economic recessions owing to the peculiar twin economic crisis of oil price meltdown and foreign exchange shortages and devaluation.

The government though spending N40 trillion during the period were unable to spur economic growth to at least match annual population growth rate of about 2.7 percent.

In 2015, Nigeria’s economy expanded by 2.6 percent before declining to -1.6 percent in 2016 in Nigeria’s first recession in a democratic era.

The economy entered recession again in 2020 with a decline of 1.9 percent.

The high jobless rate and rising consumer prices are adding to increasing insecurity in the country driven by violent insurgency attacks, kidnappings and ethnic clashes in recent months.

On Friday 13 persons were feared dead while seven others were injured in a series of bandits’ attacks on communities in Zangon Kataf, Kauru and Chikun local government areas of Kaduna State in the North of the country.

In the South Eastern State of Anambra unknown gunmen killed unspecified number of policemen and soldiers in different locations on Thursday.

The armed gang was said to have killed three policemen at Neni junction in Anaocha Local Government Area of the state, while their vehicle was set ablaze.

While three Naval officers were reportedly killed at Awkuzu, in Oyi Local Government Area of the state, before carting away their firearms.

More than 60 percent of Nigeria’s working-age population is younger than 34.

The jobless rate for women was 35.2 percent compared with 31.8 percent for men.

About 23 million people of the 69.7 million-strong labor force in Africa’s largest economy were unemployed at the end of 2020, according to the NBS report.

Another 15.9 million worked less than 40 hours a week, making them underemployed.

“Buhari has spent six years of his presidency bringing out the animal in us. There is every reason to believe that it will get worse in the remaining two years of his rule,” said Ikechukwu Amaechi, a columnist for the International Centre for Investigative Reporting (ICIR), and Managing Director/Editor-in-Chief of TheNiche Newspapers.

“For Nigerians, stitching Nigeria back together again after the Buhari presidency will be the challenge of the millennium.”

Business groups in the fast growing commercial hub of Lagos by the coast, have long urged for reforms that could unleash faster growth often feeling they are being held back by an out of touch Federal Government in Abuja, the capital in the center of the country.

The Lagos Chamber of Commerce and Industry (LCCI) recently urged the government to speed up reforms and policy changes especially to the customs service to strengthen confidence and boost the economy.

The LCCI in a recent press release noted that customs processes and procedures for the clearance of cargo at the ports is one of the biggest challenges currently faced by the business community.

“It is severely hurting investors and adversely affecting economic recovery efforts.  The situation calls for urgent intervention and reforms of the Nigerian Customs service. There are issues of undue delays, weak application of technology, arbitrariness in valuation, impunity, the uncertainty of international trade transactions, cost escalation, negative investment climate perception, ineffective mode of seeking redress, pervasive human interface, among others,” the LCCI said in the statement signed by Muda Yusuf, its Director General.

“The business community is compelled to interface with too many units of the Nigerian customs service and other government agencies which makes doing business extremely difficult and frustrating.   It also predisposes the system to brazen extortionist practices.”

Other business leaders have called for massive investments in infrastructure, electricity, digital technology and healthcare delivery to address the rising poverty and unemployment facing the African continent and Nigeria, by deemphasizing the creation of billionaires and emphasis placed on growth, addressing inequality and creating jobs.

“Instead of us having a pyramid of few billionaires I will prefer that we have a large base that has prosperity, happier people and people whose basic human needs are met. I think that is what that will give us the sustainability and the lasting peace that we need in Africa,” philanthropist and the Founder of the Tony Elumelu Foundation (TEF), Mr. Tony Elumelu, said when he spoke at the World Government Summit Dialogue, with the theme: Africa’s Future Post 2021.

“That will also address the insecurity that we have in Africa and stop the migration of our younger people. That will stem extremism and all the kidnappings we hear every day all around us because of poverty and hopelessness as people do not see a better future. We need to reset our mind to think in a better way to improve society and mankind,” Elumelu said.