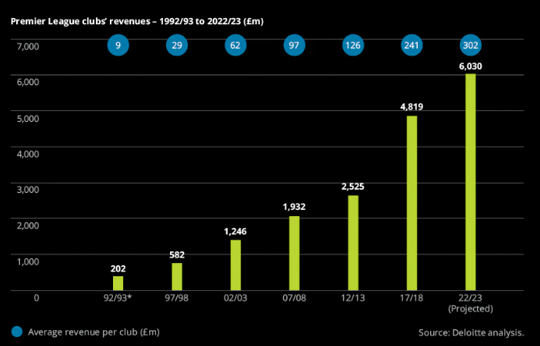 The English Premier League’s revenues are expected to exceed £6 billion this season for the first time, rapidly outpacing its European rivals.

Premier League clubs earned £4.9 billion in the 2020/21 season, according to Deloitte’s latest annual review of football finance, despite an almost complete loss of matchday revenue due to Covid-19.

This was an 8% rise on a year earlier, while Germany’s Bundesliga and Spain’s La Liga both suffered a 6% drop in revenues.

Deloitte expects the English top flight to have made £5.5 billion in 2021/22 and to top £6 billion in the current season, which kicked off at the start of August.

The English game continues to ride a wave of popularity around the world and has benefited from a significant uplift in its international broadcast rights. 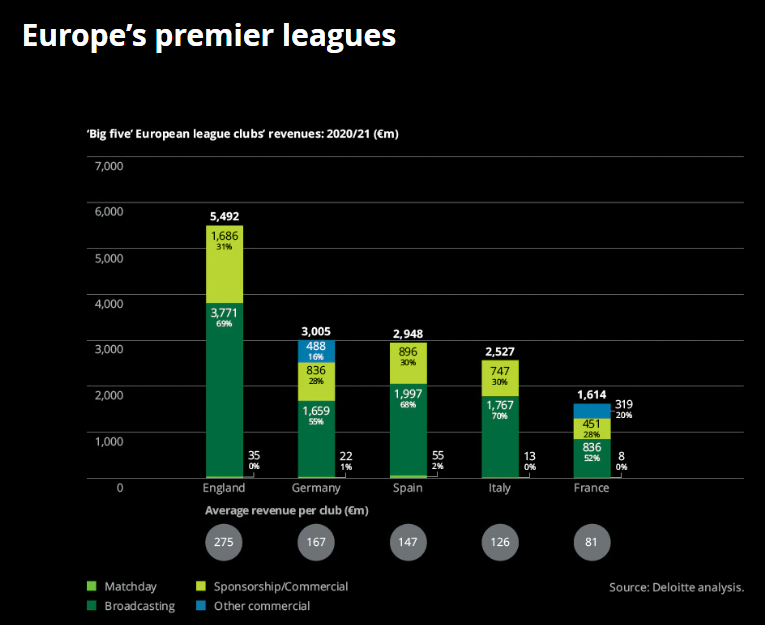 While the Premier League was the only one of the big five European leagues to boast an improvement in total operating profits, which increased sharply from £49 million to £479 million, pre-tax losses remained significant, albeit down from £991 million to £669 million.

Net debts of Premier league clubs rose by 4% to £4.1 billion.

“As the Premier League enters its fourth decade, it’s further ahead of the competition than ever before, having emerged from the pandemic without a significant increase in net debt as many might have expected,” said Tim Bridge, lead partner in the sports business group at Deloitte.

Elsewhere, Deloitte said there’s been a boom in investment across Europe’s big five leagues, with more than two-thirds made by American investors. More than 70 multi-club ownership groups now exist, compared with only 28 five years ago, according to the report.

While the Premier League enjoyed a boost in broadcast income overseas, Italy’s Serie A suffered a “significant decline” in the value of its international rights as it was unable to secure a renewed contract with beIN and matches were streamed instead on YouTube, Deloitte said.

Meanwhile, the Bundesliga signed a deal for its domestic broadcast rights that was 5% lower than during the previous cycle.