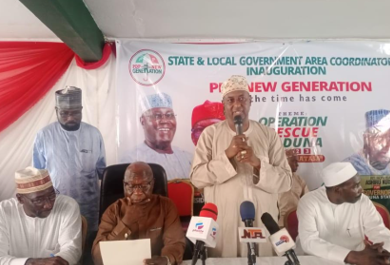 The immediate past governor of Kaduna state, Mukhtar Ramalan Yero, has been appointed as the Chairman of the People’s Democratic Party (PDP’s) Presidential Rally Committee in Kaduna.

Ramalan Yero was inaugurated alongside the PDP gubernatorial aspirant, Mohammed Sani Sidi, as the Deputy Chairman of the Committee.

Other members of the Committee are: Haruna Yunusa Sa’eed, Mohammed Sani Abbas; the National Youth Leader, Muhammed Suleiman Kadade, Shehu Sani and 54 others.

While inaugurating the Committee, the Chairman of PDP, Kaduna state Chapter, Felix Hassan Hyet, urged the Committee to put the interest of the party above any other interest.

Hyet disclosed that the Presidential candidate of the party, Atiku Abubakar will be spending three days in Kaduna state, ahead of his campaign slated for Monday.

According to the party Chairman, Atiku is expected to visit the three senatorial zones of the state.