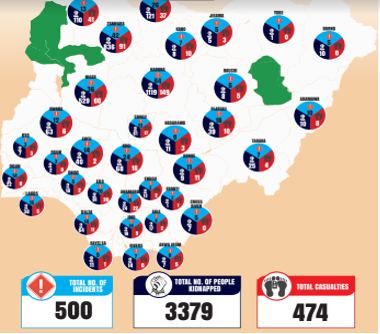 One of the major highlights of Nigeria’s instability caused by the abysmal state of security is the strength and growth of the country’s kidnap industry. Kidnap for ransom accounts for a very high share of the security crises the country faces. Although the most dominant imperative for that industry is finance, motivations differ according to armed groups and/ or geopolitical zones.
The country’s geopolitical zones have their unique challenges (a fratricidal civil war between the Hausas and the Fulanis which is a sub cause of the banditry and pastoral conflict in the North West; clashes between indigenes and settlers in the North Central; Boko Haram in the North East; youth gang clashes in the South West; sea piracy in the South-South and a separatist agitation in the South East) but kidnap for ransom is a feature that cuts across these zones.
Ideologically driven armed groups with religious motivations also engage in kidnappings to make maximum concessions of prisoner swaps from the government as the Kaduna Train Attack of March 2022 has shown.
In recent weeks, a new trend has noticeably emerged: the abduction of catholic priests. With the asking price set at ₦50 million per priest, the uptake in attacks on that demography is mostly financial.
The Catholic Church is an international institution with the financial capacity to rescue its clergy from harm’s way. Although he is not Catholic, the abduction of the prelate of the Methodist Church Nigeria in May 2022 and the ₦100 million that was paid as ransom can be said to have inspired the attacks on the Catholic clergy.
In 2020, our report, “The Economics of Nigeria’s Kidnap Industry” stated that between 2011 and 2020, Nigerians paid just below $20 million to kidnappers. The figure was arrived at using media reports detailing the sum paid to armed groups. The figure is almost definitely higher than we reported, but we stuck to what we could verify.
Based on what we could verify, between July 2021 and June 2022, no fewer than 3,420 people were abducted across Nigeria, with 564 others killed in violence associated with abductions. In the ensuing period, ₦6.531 billion was demanded in exchange for the release of captives while a fraction of that sum (₦653.7 million) was paid as ransom.
As of the exchange rates between the naira and the US dollar on 1 August 2022, these figures translate to $9,806,306.31 and $1,126,126.13 respectively. We have taken care not to include the later ransom payments for the Abuja-Kaduna train incident as most of those victims were released in July 2022.
It was reported on 25 July 2022 that eight Nigerian hostages parted with ₦100 million each, while a Pakistani hostage paid ₦200 million. These figures are particularly important because of the rising poverty levels in the country.
In 2020, Nigerians spent 62% of their income on food, leaving very little for disposable income and non discretionary spending. Over the past few years, Nigerians have become even poorer following how much they have had to part with for their loved ones, and kidnappers are adapting, and now sometimes ask for ransom payments in forms other than money.
In one instance, in the kidnap of worshippers in a Celestial Church in Wasinmi, Ewekoro LGA of Ogun State, the abductors who initially requested ₦50 million in ransom payments released their victims after ₦1 million, foodstuff such as bags of rice and beans, cigarettes and gun were paid.
Similarly, in the abduction of two children of the Sarkin Gabas of Bafarawa in Sokoto State in June 2022, the father of the abducted paid ₦2 million in ransom as well as three new Android phones. Other items such as crates of malt drinks, gallons of palm oil, codeine and water have been requested as ransom payments.
These abductions, which are also almost evenly distributed across the country, have an impact on the Nigerian economy, as it has limited business and investment in the heaviest-hit areas. This ranges from travel to starting new businesses and attracting investments.
On one hand, abductions in different regions can be linked to specific groups, either for ideological reasons, to extract concessions or for ransoms. For example, ISWAP and Boko Haram are most active in kidnappings in Borno State, where they often target travellers and aid workers.
ISWAP has begun to establish its presence in the North-West, illustrated by its daring attack on the Kaduna-Abuja train line where it kidnapped 72 passengers. As of the end of July, 37 hostages had been released for various sums starting from ₦100 million per abductee. On another hand, it appears that the bulk of kidnappings are done by disparate criminal gangs solely for ransoms.
This illustrates the extent of the challenge of illegal arms in Nigeria, coupled with an overwhelmed security architecture and other socio-economic factors such as high unemployment have formed the cocktail that has created an avenue for numerous gangs to see kidnapping as a route to make quick money.
The frequency of abduction is a spotlight on the state’s capacity to keep its people safe, and the rise of an armed group like Ansaru who promise protection from both the government and other armed groups is a threat not just to the government’s authority, but also on state territory, leading to the influx of ungoverned spaces and other contested territories.
For more insightful analysis check out sbmintel.com
Share
Facebook
Twitter
Pinterest
WhatsApp
Previous articleWhat I Experienced at RCCG Convention – Peter Obi
Next articlePreview: Liverpool vs Crystal Palace
- Advertisement -