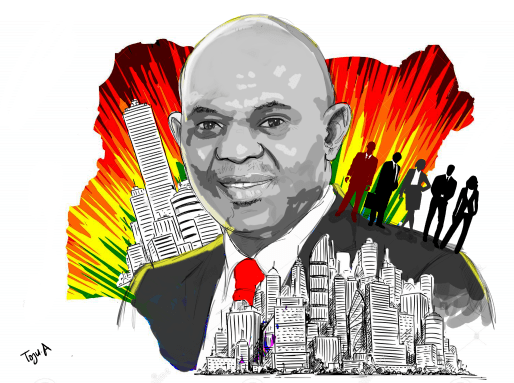 United Bank of Africa’s (UBA) Chairman Tony Elumelu spent the past 16 years crafting together a diversified African Banking empire that is just being embraced by other Nigerian lender’s.

Today, he has set his eyes squarely on cracking the Insurance sector that has remained a major underperformer, when compared to banks in Africa’s largest economy.

From banking to energy and power, hospitality with the Transcorp group, financial inclusion and jobs creation, Elumelu never fails on any mission he sets his eyes upon.

A new shark has entered into the deep blue sea, and the small fish have better beware otherwise they get swallowed.

Heirs Holdings will bring a dynamic, digitally driven offering to the general and life insurance sectors, providing clients with a real choice of products, pricing, channel, and claims handling.

“Nigerians want an insurer that will offer them services that are based on excellence, digitally driven, and affordable products; that is what Heirs General and Life Assurance will offer customers,” said Tony Elumelu, Chairman United Bank for Africa and Heirs Holdings.

These new insurance companies will leverage the latest technology to optimize cost and ensure that products will be accessible and easy to use while at the same time create jobs and magnify the sector’s contribution to the economy.

The unassuming and indefatigable businessman is not an onlooker who watches gladiators participate in the arena. He participates and wins because he has success in his DNA.

If the philanthropist, entrepreneur, oil magnum, banker, and visionary, transformed United Bank for Africa (UBA) from a small and mid-sized firm doing minute ticket transactions to a pan African lender with branches across the continent and Europe, then it is glaringly conspicuous that Tony Elumelu will use his magic fingers to galvanize the insurance industry to growth while contemporaneously creating jobs and healthy competition.

“We have the largest economy in Africa, yet insurance to GDP is abysmally low. Stakeholders have to come together and ensure that the sector contributes more… In Europe, the United States, and Asia, insurers own banks,” said Elumelu.

The industry is beset by a plethora of challenges such as little awareness & understanding of insurance products, lack of trust especially with regards to claim settlement, socio-cultural & religious beliefs of Nigerians, weak enforcement of compulsory insurance policies and the slow pace of innovation amongst industry participants.

That is even on top of the weak macroeconomic fundamentals as inflationary pressures, hike in utility bills, rising unemployment and incessant currency devaluation means a lot of Nigerians are too poor to take a cover.

Investors have never been interested in insurance stocks, and their apathy towards shares is responsible for weak valuations, this is unsurprising given abysmal dividends and lack of clear-cut strategic plans.

Interestingly, Heirs Holdings foray into the industry is conceptually well timed as the National Insurance Commission, the body that regulates insurance business in Nigeria, had mandated companies to recapitalize or shore up their capital.

A lot of insurers are up for grabs as they have very weak capital bases and deteriorating revenue that prevents them from taking on more risk, while some are technically insolvent.

What this means is that Heirs Holdings with the backing of its billionaire owner could acquire some of them and create a big insurance firm capable of competing with peers in Sub-Saharan African and across the globe.

“We are delivering insurance that is easy to understand, quick and reliable, simplifying our customers’ lives.  Our mission is simple: make insurance accessible.  Our goal is to transform customer service: cutting waiting time in claims processing and purchase to bare minutes — across all touchpoints, including mobile devices.  At Heirs Insurance, we want to give our customers what they have so often lacked – high quality insurance, at an affordable price – and with an insurer that is on their side,” said Adaobi Nwakuche, Ag. MD/CEO, Heirs Insurance.

Tony Elumelu was named by TIME as one of Africa’s leading investors and philanthropists, in the 2020 TIME 100 annual list.

The TIME 100 list, now in its seventeenth year, recognises the activism, innovation, and achievement of the world’s most influential individuals. Elumelu, who is one of only four Africans on the 2020 list, is recognised for his track record of business turnaround and value creation, and economic empowerment of young Africans.

A highly selfless man, who has been honoured across the world for his sincere empathy, humanity and deep passion to empower others especially the youth in their entrepreneurial sojourn to achieving their dreams, Elumelu is the Founder of the Tony Elumelu Foundation.

His philanthropy is imbued with his personal values, and the deep commitment to social justice which could also be seen in the different social and business aspects of his life.

He acknowledged the powerful influence of family example in his own development as a philanthropist, and that ‘he was brought up by his mother to believe that as members of society, we have responsibilities to each other a core value that was drummed into him in his youth, before he attained his present height of success and one which has continued to guide him in his support of humanity.

Evidence of those humanitarian and business instincts coming together can be seen in his passion for Africa’s rapid economic prosperity as he continues to walk the talk.

His firm believe in this vision informed the Tony Elumelu Foundation, that has harnessed Africa’s youth bulge to catalyze development and protect the future, committing to investing $5,000 each in 1,000 young entrepreneurs per year across 54 countries in Africa, and has informed his Africapitalism vision.

A term coined by the Nigerian banker and economist – it is an economic philosophy that embodies the private sector’s commitment to the economic transformation of Africa through investments that generate both economic prosperity and social wealth which is what he hopes to achieve and is already doing.

With Elumelu’s approach by empowering young entrepreneurs across Africa with seed money every year, the expected outcomes include job creation and economic prosperity.

Nigeria and Africa, without any iota of doubts, need more Tony Elumelu’s who can and have the capacity to change the narrative and boldly do so, because indeed our continent is overwhelmed by a plethora of problems including, poverty, insecurity, crime, Infrastructure deficit, and lack of visionary leadership for this reason, most economies in Sub-Saharan Africa continue to move at a snail pace.

Elumelu has led by making investments in critical sectors like agriculture, education, healthcare etc., to enacting quotas to increase women’s representation on company boards which is what his chain of companies have been doing and continue to do ahead of its contemporaries across all sectors.

The success of the companies within the Elumelu dynasty is clearly a manifestation of the vision from the top.

Beginning in 2004 with UBA Ghana Limited, the group has expanded to include 20 sub-Saharan countries, as well as offices in the United Kingdom, France and the United States.

Elumelu and his team spent time, effort and capital to pull off the unique feat. Total investments in subsidiaries between 2004 and 2017 (including UBA Pensions Custodians Limited) was equivalent to N103.2 billion as at June 2020, according to data from the Group financials.

The huge investments in the rest of Africa, UK and U.S subsidiaries are paying off big as the Nigerian banking regulatory environment becomes tighter.

UBA ended 2020 well despite the coronavirus pandemic and has also started 2021 on a strong footing.

The bank’s audited results for the full-year ended December 31, 2020, recorded impressive growth across its top and bottom lines.

The 2020 audited financials filed at the Nigerian Stock Exchange (NSE), showed that the bank’s gross earnings grew by 10.8 percent to N620.4 billion, compared to N559.8 billion recorded in the corresponding period of 2019.

UBA assets rose to N7.7 trillion in 2020, edging out First Bank of Nigeria Holdings which recorded N7.68 trillion and were subsequently forced to concede its third largest bank title to UBA.

Despite the challenging business environment during the Covid-19 pandemic and the resultant effect on economies globally, the Bank’s Profit Before Tax was impressive at N131.9 billion, compared to N111.3 billion at the end of the 2019 financial year.

In the same vein, the Profit After Tax rose remarkably by 27.7 percent to N113.8 billion compared to N89.1 billion recorded at the end of the 2019 financial year.

For the first quarter ended March 31st, 2021, UBA showed impressive double-digit growth across most of its major income lines.

The bank leveraged on modest growth in both interest and non-interest income as well as increased efficiency to deliver an impressive 24 percent year-on-year growth in Profit Before Tax in the first three months of the 2021 financial year, to N40.6 billion compared with N32.7 billion recorded in the first quarter of 2020.

Profit After Tax also grew by 26.8 percent from N30.1 billion in March 2020 to N38.2 billion in the period under review. Interestingly, UBA again sustained its strong profitability recording an annualised 20.5 percent Return on Average Equity (RoAE) compared to 19.9 percent in the same period of 2020.

Transcorp Hotel Plc has overcome the coronavirus crisis that grounded the hospitality industry to a halt last year as the company is able to generate profit through its core operations.

The company’s operating profit margins increased to 20.63 percent in March 2020 from 15.82 percent the previous year, according to MoneyCentral calculations.

A higher ratio means a firm is good and efficient in turning sales into profit, and such operating earnings can cover exceptional items such finance costs and foreign exchange losses.

Operating profit followed the same growth trajectory as it spiked by 23.98 percent to N819.16 million in March 2021 from N660.68 million the previous year.

Heirs Holdings Limited’s (HH) portfolio company, HHOG, completed the acquisition of OML17 in January 2021, in one of the largest oil and gas financings in Africa in more than a decade, with a financing component of US$1.1 billion.

The transaction represents a further implementation of the HH Group strategy of creating the leading integrated energy business in Africa.

Through a series of strategic portfolio holdings, HH is executing this strategy.

Most recently, affiliate company Transcorp made a US$300 million acquisition of Afam Power, increasing the Group’s installed electricity generating capacity to 2,000MW.