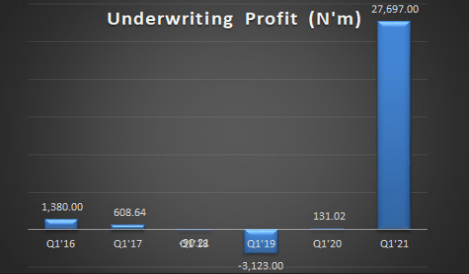 AIICO Insurance Plc has reported underwriting profit of N27.69 billion for the first quarter of 2021 against a loss of N131.02 million in the prior year period, despite losses related to COVID-19 and claims.

Alongside growth in the underwriting income across the Group, the insurer has also reported growth in revenue, which validates the effectiveness of its innovative products.

Gross premium income was up 14.19 percent to N17.34 billion in the period under review from N15.19 billion the previous year. Net premium income (NPI) followed the same growth trajectory as it jumped by 7.15 percent to N14.18 billion as at March 2021.

The underwriting income was also underpinned by N25.18 billion write back in change in the annuity fund; thitherto, the insurer has been grappling with an increase in technical reserves due to changes in  yields on the government securities and changes in mortality and increased inflation.

This increase in life technical reserves was reportedly based on significant growth in new business, impact of changes in yields on the Federal Government securities and assumption changes such as mortality, withdrawal experiences, policy expenses and increased inflation.

Analysts have warned that increased mortality rates from the virus could pressure  earnings, reserves, and profitability of the life insurance sector, as the economy slipped into a second recession in 5 years in the third quarter of 2020.

Despite the ongoing pandemic is undermining economic growth and a difficult environment that is making it difficult for companies to thrive, AIICO Insurance’s Life segment’s  premium written increased by 12.59 percent to N12.16 billion as at March 2021.

The Non-Life business followed the same growth trajectory as it grew by 51.53 percent to N7.03 billion as at March 2021 from N4.64 billion the previous year.

But the rise in COvid-19 related claims, premium rebates and lower interest rates could offset the increased demand for pandemic-related policies and reduce future profit.

AIICO Insurance is paying out more in claims than it is receiving in revenue. Its loss ratio increased to 77.37 percent in March 2021 from 58 percent the previous year. Total claims expenses spiked by 42.22 percent.

That’s why the combined ratio deteriorated to 109.10 percent in March 2021 from 88.47 percent the previous year, according to MoneyCentral calculations.

The insurer recorded negative income from investment securities of N31.70 billion, while investment income fell by 28.12 percent to N2.72 billion, no thanks to the central bank dovish stance that stoked a precipitous drop in fixed income securities.

There are concerns that the low yield environment will pressure future profit as investment returns are expected to deteriorate since insurers are not going to be getting high returns for packing their money in both short- and long-term government bonds.