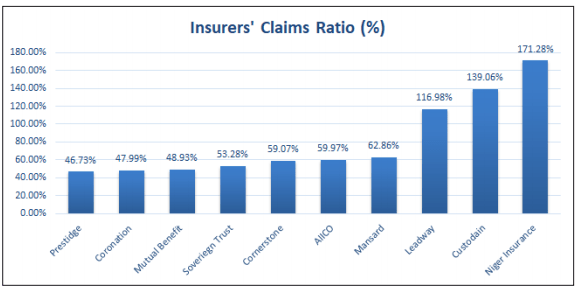 The gap between the rises in premium income and costs for insurers is at the widest point in six years, which puts some companies in a perilous state should the economy relapse into negative growth.

Money Central investigations shows that combined net premium income of the largest insurers have risen by a mere 0.39 percent to N290.21 billion in December 2020, while their combined claims expenses rose by 27.84 percent to N191.46 billion.

Of course, in order to meet liabilities associated with claims, companies invest in stocks, bonds, and real estate; such investment portfolio strategies as adopted by firms that are well liquid and capitalized have helped absorb underwriting losses, ensuring that profit positions are maintained.

Industry operators fret that if something urgent isn’t done to curb the divergence then existential crisis awaits the industry.

Some stakeholders say the losses are aggravated by the greed to take up some particular businesses, contrary to actuarial advice.

It is noteworthy a lot of times inadequate pricing elicited by desperation to acquire customers results in huge liabilities; and clearly if premiums for that business is inadequate then claims will not be paid in the future.

The coronavirus pandemic that slowed down economic activities and the protest against police brutality “ENDSARS” by the Nigerian Youths added another layer of concerns.

Insurers incurred losses relating to properties damaged during the protest, while the virus stoked mortality rates and there were settlements for business and event cancellations

The Nigeria Insurers’ Association (NIA) reported a total of 1,661 protest-induced claims as a result of the #EndSars protests, of which 143 substantiated claims worth N105.0m have been settled.

“We believe the settlement of claims is key to emphasizing the purpose of insurance among the Nigerian populace and encouraging uptake of insurance policies although this would imply higher costs and depressed profitability for insurers,” said analysts at Afrinvest Securities.

The regulator is taking drastic actions on firms that have negated the principle of insurance.

Interestingly, the insurers’ claims ratio stood at 171.21 percent in December 2020 from 42.41 percent the previous year. At 324.20 percent, Niger Insurance has the highest combined ration among peer rivals.

The insurers’ loss ratio moved to 101.15 percent in the period under review from 64.02 percent the previous year.

Also, it had negative retained earnings of N24.19 billion and posted a loss after tax of N4.17 billion.

Interestingly, the insurer suffered deteriorating underwriting performance as it posted underwriting loss of N157.63 million while the combined ratio weakened to 469.03 percent in December 2018 from 330.24 percent as at December 2017.

The composite insurer’s claims ratio increased to 116.98 percent in the period under review as against 54.23 percent the previous year. While there were mounting obligations due to macroeconomic headwinds, Leadway Assurance recorded strong profit that was underpinned by investment returns.

Cornerstone Insurance’s net premium income fell by 10.74 percent to N5.88 billion as at December 2020, while claims expenses spiked by 13.21 percent to N3.47 billion in the period under review.