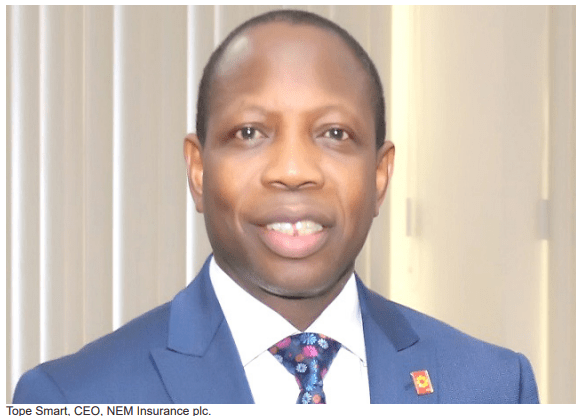 While the majority of insurers are reeling from unfavorable underwriting performance brought on by high inflationary pressures, devaluation, and the coronavirus induced uncertainties, NEM Insurance Plc is thriving as it is able to earn more in revenue than it is paying out in claims.

Of course, investors pay close attention to the combined ratio because they have a conviction the metric is more unswerving than the net income that most times gets juiced up by exceptional items or one-off gains such as foreign exchange gains and investment income.

For the first three month through March 2020, NEM Insurance’s combined ratio stood at 92.61 percent-while it is above 89.04 percent recorded the previous year- lower than the 100 percent generally accepted benchmark.

The combined ratio is calculated by taking the sum of incurred losses and expenses and then dividing them by the net premium income.

As a result of an efficient underwriting performance, the insurer posted a real underwriting result of N520.13 million as at March 2020, according to MoneyCentral calculations.

For clarity, the real underwriting performance is 1 minus the combined ratio multiplied by net premium income; on the other hand, the underwriting profit does not include management expenses to arrive at its figure.

The company’s improved efficiency ratio was bolstered or underpinned by strong growth in revenue, which means its market penetrating products are making an inroad into the Nigerian market.

The insurer felt the pang of the sharp drop in yields as investment income dipped by 5.15 percent to N288.32 million in March 2021 from N304.01 million the previous year.

Insurance companies pack their money in both long- and short-term government securities when yields are high. However, the central bank’s decision to bar individuals and local corporations from its Open Market Operations sent yields crashing to an unprecedented level.

NEM operates in a tough and unpredictable macroeconomic environment, and a stellar performance like this shows its owners understand the dynamics of the industry.

Despite being the largest economy in Africa, insurance penetration remains abysmally poor; and stakeholders are mulling leveraging technology to attract more young people into the insurance net.

South Africa, the largest and most established insurance market, accounts for 70 percent of the continent’s $68 billion total premiums, according to global research house, McKinsey and Company.

International Risk Management Institute defines as “the total premium (direct and assumed) written by an insurer before deductions for reinsurance and ceding commissions.

“We have to come together and ensure that there is an improvement to the industry’s contribution to the economy,” Tony Elumelu said during the launch of two companies: Heirs Insurance and Heir Assurance Limited

The billionaire businessman said the new insurers will bring new technology innovations and deliver superior service to customers through a dedicated and talented workforce.

It is interesting to note that Mckinsey said in the report that levels of insurance penetration in Africa are half the world average measured as a percentage of GDP, and premiums per capita are 11-fold lower than the world average.

The report stated that the low penetration means the sector is in its embryonic stage, and that points to significant scope for growth.

McKinsey added that stimulating growth through structural reforms, increasing access through digital innovation and wider distribution, accelerating growth through competition and innovation, using regulatory and supervision to get to consolidation, are key trends that could unlock growth in Africa.

The National Insurance Commission (NAICOM), which regulates the industry in Nigeria, is strengthening regulatory and capital requirements of companies to ensure their solvency and suitability.

Notably, the regulator is worried that companies’ capital bases are too weak to undertake big-ticket business that will help galvanize premium income in such a way that it covers all expenses.

The regulator said it will embark on a market development drive that will enable it to achieve N1.5 trillion annual premium income for the insurance sector.

Despite these challenges, NEM Insurance’s gross premium income spiked by 34.68 percent to N9.36 billion from N6.98 billion the previous year while net premium income surged by 45.42 percent to N7.04 billion in the period under review as against N4.84 billion as at March 2020.

NEM Plc (“NEM” or “The Company”) commenced operations in Nigeria through the agency of Edward Turner & Co in 1946 and became listed on the Nigerian Stock Exchange in 1989 following its privatisation by the Federal Government of Nigeria.

NEM was initially licensed by NAICOM to offer both non-life and life insurance services, however, following its merger with Vigilante Insurance Company during the 2007 recapitalisation exercise, the Company focused majorly on non-life business.