Atiku Receives PDP Certificate of Return, Says Much is to Be Done 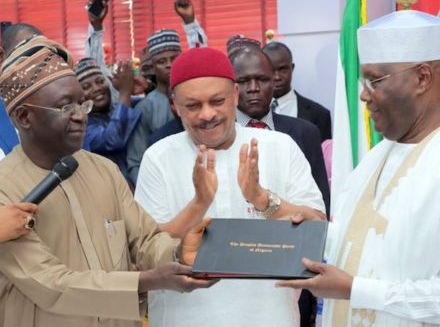 Former vice president, Atiku Abubakar yesterday received his certificate of return as the presidential candidate of the Peoples Democratic Party (PDP) in the 2023 general elections, urging the party to bear in mind that there was much work to be done before victory.

He spoke as the National Chairman of PDP, Dr. Iyorchia Ayu called for a united party, describing the outcome of the special national presidential convention as a family affair where there was no victor and no vanquished.

According to Atiku who spoke on his victory at the convention, “we should not take that or their defeat for granted. We must unite and work extremely hard for every single vote in this country. There is so much to do. And there is very little time to waste. So let’s get to work.”

Atiku who called for unity in the PDP further said, “Let us all remember that what just happened is a contest within a family to decide how to put our best foot forward. The main contest is the one to win the presidency of our country for our party.

“It will require the entire PDP family and other supporters and sympathisers. We must pull everyone together. Nobody should be excluded; I beg of you.”

The former vice president said he had already visited some of those who contested against him, “as a way to lead in that effort to unify the party so that we can face our real opponents, defeat them in the elections and begin the process of rescuing and rebuilding this country from the callous and dangerous All Progressives Congress (APC) misrule over the past seven years which is there for everyone to see.”

He further said, “I am honored and humbled to receive this Certificate of Return having emerged as our party’s candidate in our just concluded special convention. This victory is a victory for all of us, for our party, and for the vast majority of Nigerians suffering under the misrule of the APC. It was a collective effort, and I’m very grateful for everybody’s contributions.”

Expressing his gratitude, Atiku said, “I am particularly grateful that you kept your word and gave us contestants fair treatment, despite what might have been a difficult situation.

“Your integrity and even handedness must be commended. I commend our party’s National Executive Committee for putting our party and our country first in its deliberations and decision-making process.

“I thank all those who assisted my campaign in a variety of ways to enable me to crisscross this vast country and make my case for our delegates and other party elders and members.

“To all those who volunteer their time to help with organising the convention, as well as the security personnel and agencies who ensured that the event was successful, I say thank you very much indeed.

“I also thank my family, for putting up with my demands and the disruption this quest to serve obviously brought about.”

He also commended the NWC for transforming the party secretariat.

“So let me commend the National Working Committee for transforming this place into a decent and beautiful place. This is a clear evidence that, if we have a new PDP government, we will transform this country,” he added.

In his speech, the PDP chairman said that the event was not a celebration of victory.

“Rather within the PDP family, we had a minor contest, a small contest within the family. There were no victors, there were no vanquishes, the party won. It is the party that won. Atiku Abubakar is not yet victorious. He has only been produced as our candidate, the candidate of the whole party.

“As we marched forward, we need all of you because each one of you had a supporter and all of you plus all your supporters, we want you all to fuse together into one happy political family. It is this family that will face the battle ahead.

“We have only started a journey. We shall end this journey sometime next year. By the first of June next year, we should take over power from colorless and clueless government that has totally destroyed this country.

“All of you are aware of what has happened to our country in the last seven years. I don’t need to repeat issues of insecurity, total destruction of the economy, total disunity of the country. We have never been as divided as we are today as a country. Families are divided, communities are divided against each other.”