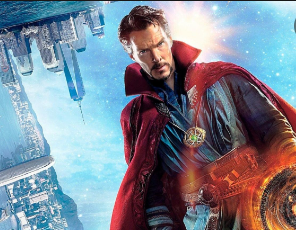 With the arrival of Doctor Strange in the Multiverse of Madness on Disney+, the streamer’s Marvel Cinematic Universe in Timeline Order now shows the Doctor Strange sequel taking place after Eternals and before Hawkeye.

According to Disney+, Doctor Strange 2 is now the twenty-ninth project within the MCU.

The updated timeline order of Marvel Studios movies and Disney+ series is as follows:

9. Guardians of the Galaxy

25. The Falcon and the Winter Soldier

26. Shang-Chi and the Legend of the Ten Rings

28. Doctor Strange in the Multiverse of Madness

Did Doctor Strange 2 Occur During Spider-Man: No Way Home?

Given their Multiversal themes, most Marvel fans believed that Spider-Man: No Way Home led directly into Doctor Strange 2; and granted, that may still be the case. However, now knowing that Multiverse of Madness happened before Hawkeye raises a few questions.

First of all, Hawkeye is a Christmas story; and the final scene of No Way Home shows Spidey sporting his new suit in New York City during the holidays.

Knowing now that Doctor Strange 2 takes place before Hawkeye, is it possible that the ending of No Way Home occurred post-Multiverse of Madness?

If this proves to be the case, this means Multiverse of Madness happened before Peter Parker moved into that New York City apartment and took a swing in his new suit through the snow. It will definitely be interesting to see where the Spider-Man threequel will fall in the chronological timeline when it eventually comes to Disney+.

Also, since Doctor Strange did reference the events of No Way Home in Multiverse of Madness, this newly confirmed timeline once again begs the question of why Marvel heroes have yet to address what happened in Eternals.

At the end of the film, the Celestial Arishem seemingly split the atmosphere and took Sersi, as well as several other Eternals, in order to judge mankind. Dane Whitman, as well as others, saw this happen.

One would think that such an occurrence would be considered an Avengers-level threat. This is why it’s odd that Hawkeye, Moon Knight, Ms. Marvel, and now Doctor Strange have never referenced it; but hopefully, that timeline issue will be resolved in future stories.

Doctor Strange in the Multiverse of Madness is now available to stream on Disney+.