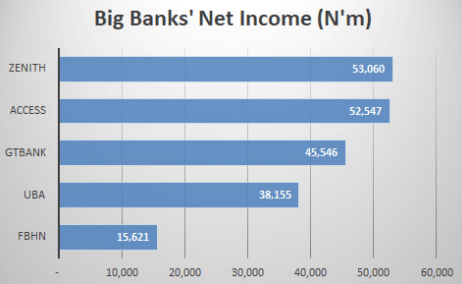 The lender is a close to displacing Zenith Bank as the most profitable financial institution, but the current economic reality is that a punitive regulatory environment is making it difficult for lenders to record strong earnings.

Despite a low yield environment brought on by the central bank’s monetary policies, Access Bank’s is the only Tier 1 lender to magnify revenue as interest income was up 9.04 percent to N143.79 billion as at March 2021 from N131.68 billion the previous year.

Drilling down the financial statement of Access Bank shows top line (revenue) got bolstered by uptick in investment securities such as short- and long-term government bonds.

Nigerian banks are facing challenges on many fronts, as a challenging operating environment, and increased competitive intensity—the pandemic that balloon loan loss expense, and currency devaluation continue to undermine the industry.

There has been incessant debit to their reserves by the central bank for missing out of the cash reserve ratio deadline, while they have not recovered from a dovish stance that sent net treasury yields tumbling.

The central bank downward revision to electronic banking fees, policy measures taken to stabilize the financial system and increase lending to stimulate the production of goods and services, have mounted pressure on banks’ earnings.

As a result of the aforementioned challenges, the 10 largest lenders collectively grew net income by 1.67 percent to N237.95 billion as at March 2021, the slowest growth in more than four years.