Adesina Re-elected as President of the African Development Bank Group 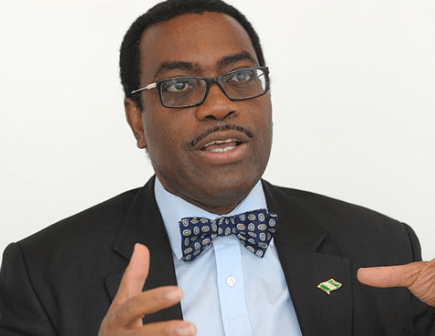 Editorhttps://moneycentral.com.ng
Akinwumi A. Adesina has been re-elected to serve a second five-year term as President of the African Development Bank Group on Thursday, August 27, 2020 by the Board of Governors of the Bank.
A globally renowned development economist and a World Food Prize Laureate and Sunhak Peace Prize Laureate, Adesina has distinguished himself in driving a bold agenda to reform the Bank and accelerate Africa’s development. He was first elected as President of the Bank on May 28, 2015.
As newly re-elected President, Adesina, a former Nigerian Minister of Agriculture, will begin his new term on September 1, 2020.
The election result, which gave him a hundred percent of votes of all regional and non-regional members of the Bank, was announced by the Chairperson of the Board of Governors of the Bank, Niale Kaba, Minister of National Planning of Côte d’Ivoire.
The election took place on the final day of the 2020 Annual Meetings of the African Development Bank Group, which was held virtually for the first time in the Bank’s history.
Minister Niale Kaba, said, “I am delighted that the Board of Governors have re-elected Dr. Adesina for a second term in office as President. As shareholders, we strongly support the Bank and will give him all the necessary support to carry forward and implement his compelling vision for the Bank over the next five years.”
Adesina’s first term focused on the bold new agenda for the Bank Group based on five development priorities known as the High 5s: Light up and Power Africa; Feed Africa; Industrialize Africa; Integrate Africa; and Improve the Quality of Life for the People of Africa.
During Adesina’s first term, the Bank achieved impactful results on the lives of 335 million Africans, including: 18 million people with access to electricity; 141 million people benefiting from improved agricultural technologies for food security; 15 million people benefiting from access to finance from private investments; 101 million people provided with access to improved transport; and 60 million people gaining access to water and sanitation.
The Bank has maintained its AAA-ratings by all major global credit rating agencies for five years in a row. The Board of Governors of the Bank Group approved a 125% increase in the General Capital of the Bank, raising its capital from $93 billion to $208 billion, the largest in the history of the Bank.
Share
Facebook
Twitter
Pinterest
WhatsApp
Previous article
Buhari Congratulates Adesina Re-election as AfDB President.
Next article
FG shifts resumption of international flight to Sept 5
- Advertisement -