The Central Bank of Nigeria (CBN) has been issuing more licenses to financial Technology (fintechs) companies over the past few months after a two-year hiatus, according to the latest Africa fintech report by Renaissance capital.

This implies an even more competitive dynamic for the sector in the year ahead, Renaissance capital noted.

Nigerian FinTechs raised $865.4mn in new capital in 2021, according to Africa: The big deal.

According to the latest Africa fintech report by Renaissance capital, following a historic year for global and African private markets fundraising as well as global tech/fintech IPOs, ongoing rhetoric about anticipated multiple rate hikes by the US Fed and other global central banks to tame inflationary risks sent tech/fintech and growth stock valuations plummeting in January, as investors re-allocated to value and real economy-focused businesses. 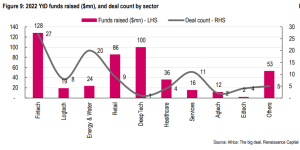 “Considering the above, we expect deal making to remain frenetic and, in an African context, to see more investor sensitivity towards actual business delivery vs targets, with more pressure on larger and later-stage funding rounds, as valuation sensitivity tends to be much lower at earlier stages,” Rencap analysts led by Adesoji Solanke said in the Feb 2 note.

The African tech ecosystem is also still relatively nascent in its development, with only eight unicorns as of FY21, representing less than 1 percent of the global unicorn count of 959.

January saw the continuation of Africa-focused VC fundraises, including TLcom Capital and Norrsken22.

According to Prequin, as at October 2021, there were 120 Africa-focused private capital funds in the market looking to raise $17.6bn, with VC representing $2.8bn.

” We think it is important to contextualise what is happening – the cash pile remains high (the global dry powder in private equity, VC and SPACs as at mid-December 2021 exceeded $900bn, with c. 1% focused on Africa) but the price of that cash is what is rising,” Solanke said.