These Contractors Are Involved In Building Dangote Refinery 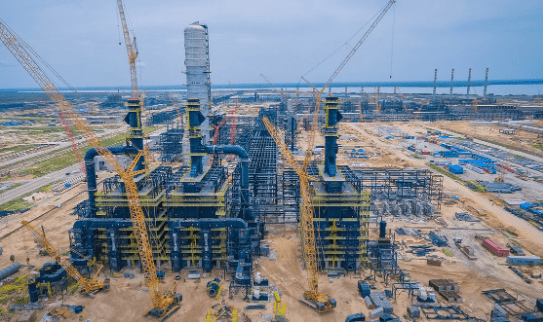 Dangote refinery is a 650,000 barrels per day (bpd) integrated refinery and petrochemical project under construction in the Lekki Free Zone near Lagos, Nigeria. It is expected to be Africa’s biggest oil refinery and the world’s biggest single-train facility, upon completion in 2022.

The refinery will process a variety of light and medium grades of crude to produce Euro-V quality clean fuels including gasoline and diesel as well as jet fuel and polypropylene.

Dangote Oil Refinery, a company owned by the Nigeria-based Dangote Group, is developing the project with an estimated investment of $19bn. Nigeria’s Federal Executive Council (FEC) approved the acquisition of 20% minority stake in the project by state-owned Nigerian National Petroleum Corporation (NNPC) for $2.76bn in August 2021.

The integrated refinery and petrochemical project is expected to generate 9,500 direct and 25,000 indirect jobs.

Contractors Working on the Project

C&I Leasing was contracted to provide transportation and installation services for mooring systems and subsea pipelines of the refinery.

Sulzer Chemtech, a fluid engineering company based in Switzerland, was contracted to supply column internals, packings, and trays for the Dangote refinery in July 2020.

Hyundai Heavy Industries (HHI), a company based in South Korea, received an order worth $58m to build 15 liquefied petroleum gas (LPG) tanks for the refinery project in April 2018.