Dementia Symptoms: The Hair Change Seen in ‘70%’ of Patients with Alzheimer’s Disease

Advancements in medicine have seen the number of elderly people increase year on year, explaining the rising prevalence of dementia.

The faster the disease is diagnosed, the longer doctors are able to extend the quality of life of sufferers. Some studies suggest brain decline may be accompanied by changes in the hair and nails.

In a 2015 report titled Skin Lesions: A valuable sign in the diagnosis of dementia syndromes, experts raised the issue of skin lesions in patients with Alzheimer’s disease.

They noted that cognitive decline was “often accompanied” by skin lesions resulting from neglected hygiene. 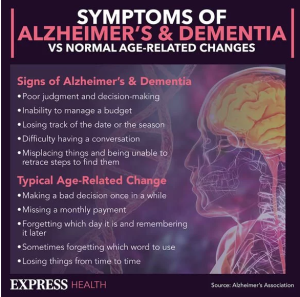 These cutaneous manifestations tend to include bedsores, where the skin is injured due to prolong pressure on the skin.

Excoriation disorder (chronic skin-picking), mycoses (caused by infection with a fungus), and post-traumatic wounds due to disturbance of gait, have also coincided with brain decline.

Elsewhere in the report, the authors noted: “In Alzheimer’s disease, lesions occur in the hair and nails […].

“[…] It seems that the skin manifestations associated with dementia syndromes can serve as a valuable sign in the course of diagnosis.

“In those patients who sudden from dementia associated with vascular lesions, cutaneous manifestations are often observed in the form of livedo reticularis which is an important diagnostic criterion.”

These physiological changes may result from other shifts in the chemical make-up of the body, it was suggested.

The authors added: “Studies show a correlation between a reduction in the concentrations of mercury and the duration and severity of dementia.

“Changes in the concentration of micronutrients in the nail plate are obsessed as the earliest stages of the disease.”

Interestingly, changes in the hair structure of patients with the disease are equally common.

“Studies of human hair show that in 85 percent of patients diagnosed with Alzheimer’s disease the hair structure is abnormal,” added the authors.

The research in question, published in JAMA Dermatology, found 70 percent of hair samples of patients with Alzheimer’s disease consisted of pseudo pili torti.

Pili torti is medically defined as a hair shaft disorder characterised by hair that does not grow long and is easily broken.

The hair often takes on a coarse or spangled appearance as a result.

The researchers concluded their report by noting that the need for accurate and fast diagnosis of dementia has never been more apparent.

“Coexistence of skin lesions perceptible at an early stage appears to be significant in the diagnosis of [dementia syndromes],” they added.

“Also, we should be aware that many dermatological aspects coexist with the underlying disease, i.e. itching, iatrogenic lesions, and skin lesions resulting from neglected hygiene.”