Despite having one of the ugliest charts on the Nigerian Stock Exchange (NSE), an insider at Nigerian Breweries (NB) may be calling a bottom with his recent purchases of the embattled brewers shares.

Nigerian Breweries stock is down some 78 percent since peaking at N190 per share in mid-2017 (see chart). 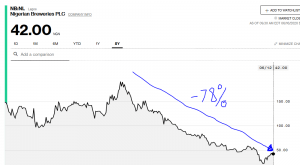 The maker of beer and non-alcoholic beverages has been caught up in brutal 3-way fight for market share with Guinness Nigeria and new kid on the block International Breweries (owners of Budweiser).

Its flagship Heineken, beer volume was broadly flat during the quarter under review and declined by a high single digit in March 2020 on the back of price increases undertaken in February and the restriction on distribution of alcohol beverages.

Cash from operations also printed negatively for the first time since Q1 2018.
Nevertheless, a Nigerian Breweries insider Kolawole Babalola Jamodu, a Non-Executive Chairman purchased some 10,000 shares at an average price of N43.27 per share on 28th May 2020, according to a filing on the NSE.

The total cost of the transaction was about N433,000.Insider purchases are interesting for us at MoneyCentral as it is often considered smart money buying.

Nigerian Breweries has fallen far from the heights it once was and if this is a bottom then long suffering investors will be quite thankful.

The firm which was the second largest listed stock on the NSE some 4 years ago has now dropped out of the top 5.