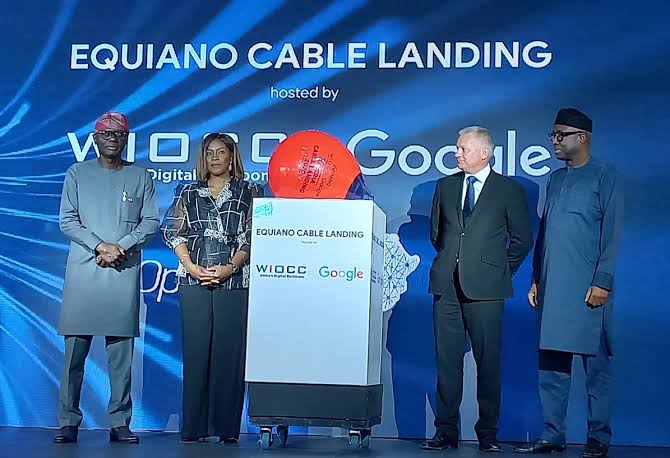 Google has unveiled plans to inject over $10.1 billion into the Nigerian economy in the next three years through its Equiano submarine cable.

The cable, which landed in the shores of Lagos today, is said to have the capability of also creating six million jobs within the same period.

The landing of the cable was witnessed by the Governor of Lagos, Babajide Sanwo Olu and other prominent dignitaries, including representatives of the Minister of Communications and Digital Economy and Executive Vice Chairman of the Nigerian Communications Commission, NCC.

Speaking at the landing site in Eleguishi, Lekki Lagos, Director, Google West Africa, Juliet Ehimuan said: “Google is committed to supporting Africa’s digital transformation and we are excited to see the impact of the landing of Equiano in Nigeria.

“We’ve worked with established partners and in-country experts to guarantee that Equiano has the greatest potential effect in Nigeria and throughout Africa.

“Equiano is set to make an enduring contribution towards the development of Nigeria’s communications infrastructure and today marks another major step in its development.

“We look forward to honouring our commitment to be part of Africa’s digital transformation,” Ehimuan added.

She also boasted that the cable, when it begins first phase of capacity spread in the country, will make economic impact by boosting GDP by USD 10.1 billion by 2025 and job creation by 1.6 million by 2025.

Chief Executive Officer of WIOCC, Chris Wood, also said: “We are proud to have been selected by Google as the landing partner for the Equiano cable in Nigeria, landing the cable directly into the OADC Lagos data centre.

“From there it will be extended to other data centres across Lagos.

“The Equiano cable will deliver improved internet quality, speeds and affordability to the people of Nigeria.

“However, for the benefits to be fully felt throughout Nigeria, hyperscale connectivity needs to be extended from the Lagos area to the rest of the country. To make this happen, WIOCC is also deploying a comprehensive, hyperscale national fibre network, in partnership with Phase3 telecom.

“The network will go live in phases, starting in June and continuing through to the end of the year.

“When combined with the Equiano cable this network will deliver transformational benefits across the country.”

The Equiano cable was named after Nigerian-born writer and abolitionist, Olaudah Equiano.

The cable ran Portugal in western Europe, through more than 12,000km along the West Coast of Africa and initially landed in Lomé, Togo and now in Lagos, Nigeria.

Google says with a design capacity roughly 20 times larger than any other cable currently serving the region, the Equiano subsea internet cable will have a direct impact on connectivity, resulting in faster internet speeds, reduced internet prices and improved user experience in Nigeria