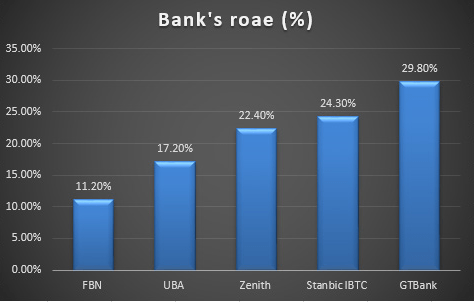 If the dead can look back, Tayo Aderinokun will be happily fulfilled that Guaranty Trust Bank Plc or GTBank is the most successful lender in Nigeria by all financial metrics.

Tayo Aderinokun, an entrepreneur and visionary leader, who died in June 2011, co-founded Guaranty Trust Bank with Fola Adeola in 1990, as both had worked at Continental Merchant Bank.

Just as soldiers win battles to appease the spirit of their colleagues who had fallen during the war, Fola Adeola is making sure his friend’s labour is not in vain as he has transformed the bank into a multinational company spreading its tentacles across the globe.

In 2011, GTBank, with a market capitalization of N379.03 billion, became the most capitalised lender in the country, eclipsing the old generation banks such as Firstbank Holdings Plc, Union Bank, and Wema Bank respectively.

To be successful in life, you have to be consistent, and to this very day, GTBank has been consistently at the top as its market capitalization now stands at N912.36 billion as of 2:00 pm on March 19,2020.

GTBank’s market value of N912.36 billion is greater than its book value of N661.06 billion, which means the stock market is assigning a higher value to the lender due to the earnings power of its assets.

Consistently profitable companies typically have market values greater than their book values because investors have confidence in the companies’ abilities to generate revenue growth and earnings growth.

The lender has a price to earnings ratio of 4.40 times earnings, and that makes its shares attractive for investors who want to magnify their earnings.

Fola Adeola will be saying to himself that he and his bosom friend have a lot to discuss in paradise, where they will be giving everlasting praise and testimony to the Angels.

GTBank is the most efficient lender in Nigeria

GTBank has delivered higher returns to shareholders and investors more than its peer rivals, utilizing the resources of its owners in generating higher profit even amid a tough regulatory and difficult environment.

Return on equity (ROE) is a ratio that provides investors with insight into how efficiently a company (or more specifically, its management team) is handling the money that shareholders have contributed to it.

In other words, it measures the profitability of a corporation in relation to stockholders’ equity. The higher the ROE, the more efficient a company’s management is at generating income and growth from its equity financing.

Despite inflationary pressures, incessant devaluation of the currency, and the cost of doing business in Nigeria, GTBank’s cost to income ratio of 39.10 is the lowest in the entire banking industry.

Despite the punitive regulatory and unpredictable macroeconomic environment and combined with the coronavirus pandemic headwinds, GTBank’s net income increased by 2.33 percent to N201.43 billion in December 2020 from N196.84 billion the previous year.

The growth at the bottom line (profit) was largely driven by a 231.97 percent surge in foreign exchange revaluation gains to N56.63 billion as at December 2020 and upsurge of 155.4 percent in income from financial asset to N12.45 billion that helped compensate for a reduction in interest income and spiraling loan loss expense on financial asset.

As a result of huge write offs related to the coronavirus pandemic headwinds that paralyzed economic activities as government imposed a lockdown to curb the spread of the virus, impairment on financial asset surged by 110.10 percent to N6.24 billion in the period under review from percent to N2.97 billion the previous year.

It is noteworthy that GTBank and peer rivals are fighting battles on many fronts as the central bank punitive policies are undermining growth for an industry reeling from slow economic recovery and the Covid-19 crisis.

First, in its dovish tone, the central bank barred individuals and domestic firms from its Open Market Operations (OMO), and that sent the net treasury bill yields crashing. The policy didn’t favor lenders who parked their money in short term government securities when yields are high.

Second, the apex bank slashed the monetary policy rates so as to stabilize an economy reeling from the Covid-19 crisis that paralyzed business activities and tipped the country in its second recession in less than 6 years.

It also asked lenders to do the impossible task of holding 27.50 percent of their deposit as reserves-more than 10 times that of South Africa and six times their Kenyan counterparts.

Third, the Abuja based bank hiked the loans to deposit ratio to 65 percent as it seeks to force lenders to extend credit to the real sector of the economy.

However, the policy may cause non-performing loans to surge and result in deteriorating asset quality, while boosting cash reserve ratio, limits banks’ ability to put their capital to work in high yielding assets.

Guaranty Trust Bank PLC was incorporated as a limited liability company licensed to provide commercial and other banking services to the Nigerian public in 1990 and commenced operations in February 1991.

In September 1996, Guaranty Trust Bank plc became a publicly quoted company and won the Nigerian Stock Exchange President’s Merit award. In February 2002, the Bank was granted a universal banking license and later appointed a settlement bank by the Central Bank of Nigeria (CBN) in 2003.

Guaranty Trust Bank undertook its second share offering in 2004 and raised over N11 billion from Nigerian Investors to expand its operations.

The IPO raised $750,000,000. In the same year, they successfully placed Nigeria’s first private Eurobond issue on the international capital markets.

The GTBank $500,000,000 Eurobond was the first ever Benchmark Eurobond issued by a Nigerian corporate and the second Eurobond programme by GTBank in the last 5 years.

The long-term debts of Guaranty Trust Bank plc are rated BB- by Standard & Poor’s and AA- by Fitch Ratings, which are the highest ratings for a Nigerian bank.