Heritage Bank on Hook for $2.16 million as Japaul Defaults on Gold Contract 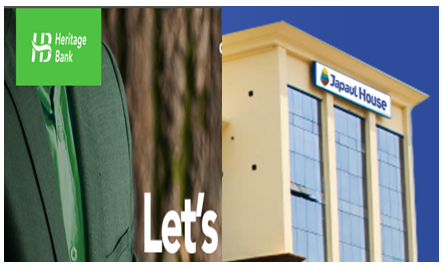 This is not the best of times for Japaul Gold and Ventures Plc, a company that is routinely flirting with bankruptcy or Heritage Bank for that matter, which has been ensnared in a default by Japaul leaving the bank on the hook for $2.16 million.

Japaul Gold and Ventures Plc was involved in the sale of commodity (gold dore bars) covered by a forward contract with Quinn Mcgrath Limited in which Quinn Mcgrath made a prepayment of $2.16 million guaranteed by Heritage Bank.

The bank guarantee was for a period of 60 days in which Japaul Gold and Ventures Plc was expected to have executed the contract.

Not surprisingly, Japaul Gold and Ventures Plc, defaulted in executing the contract within the stipulated period thereby making the guarantee to crystalise and made the total amount to become a debt immediately and payable by the company to Heritage bank.

Japaul’s auditors claim to have contacted Heritage Bank several times to confirm the balance outstanding against Japaul at 31 December 2021 to which the bank refused to confirm the amount to them.

Nevertheless, the auditors estimated the amount of N1.1 billion as the total outstanding by Japaul due to Heritage Bank at the end of the 2021 financial year.

MoneyCentral believes it is highly unlikely that Heritage Bank will ever get its money back from Japaul because the Group has been making persistent losses over the years, something a little risk management and due diligence by Heritage Bank could have uncovered.

“The company suffered substantial losses from its operations in the year from curtailed activities, which had raised doubt about its ability to continue as a going concern,” its auditors PKF accountants and business advisers said.

In another twist to the tale which we suspect is related to its default in delivering so called gold dore bars to Quinn Mcgrath, Japaul Gold and ventures disclosed that it is indebted to investment firm GTI Capital to the tune of N381.6 million.

Japaul said it used part of the borrowings (N180 million) to invest in a Gold Mutually-Managed Investment Program (MMIP) for which it is entitled to a guaranteed yield of 20% return on its investment in the sum of N36 million, exclusive of the principal investment sum for the initial term created, and paid in equal monthly instalments on or before the termination of the initial terms.

The investment is for a term of 60 days; and it is expected to be deployed by the Japaul Gold and Venture Plc for the evacuation of Gold Dore Bars to vault and to designated buyers in Nigeria, Dubai and Italy, according to Japaul.

MoneyCentral however does not understand how a Gold backed mutual fund is expected to pay a distribution or guaranteed yield of 20%.

Funds that invest in gold are unlikely to receive any payout, as the yellow metal does not pay any interest or dividend. Hence gold funds may not offer dividend plans.