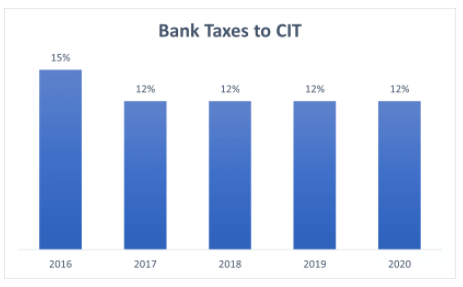 The Nigerian government may not like to admit it often, but banks have shown for years they are probably the most important industry in Nigeria in so many ways and now even in terms of tax generation.

Data culled from EUA Intelligence shows that about 13 major banks paid out around N158 billion in taxes to the government in 2020, accounting for around 12 percent of total company income taxes generated during the year by Federal Inland Revenue Service (FIRS).

In 2020, FIRS reported that its actual company income taxes generated fell to N1.275 trillion compared to N1.6 trillion it generated in 2019 as COVID-19 dented the profitability of several businesses and industries in the country and costing the government over N325 billion in lost taxes.

In recent years, banks have been challenged with regulatory uncertainties and policy changes that have had severe impact on their financial performance.