Jim Rogers: “The Ukraine War Should Not Be Happening, It’s Absolute Madness” 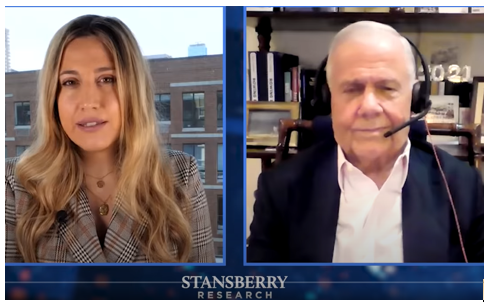 “None of this should be happening, it’s absolute madness,” a shocked Jim Rogers told Stansberry Research’s Daniela Cambone in his first video appearance since Russia’s invasion into Ukraine.

Rogers argues that the current geopolitical crisis stems from 2014, when the U.S. State Department instigated a coup in Kiev. U.S. elected leaders are seeing their actions be paid for gravely, “now we’re all paying a gigantic price for it,” he says.

Rogers details his argument on why the increasing prospects of Georgia and Ukraine joining NATO aggravated Russia… and how the threshold of tolerance was breached from Russia’s point of view years later.

Rogers emphasizes a critical stance against economic sanctions, and how financial warfare directed from the U.S. will crush the dollar sooner than expected.

Frantically, other sovereign nations are trying to, “come up with something to compete with the U.S. dollar,” the legendary investor said. “We’re [the U.S.] shooting ourselves in the foot every day,” he says.

This comes off the heels of the Biden administration’s pause on all Russian oil imports as sanctions and financial warfare continue to ramp up as a deterrent of war.

Rogers parallels a turning point in monetary history to the current state of the United States and the dollar saying, “it certainly was not good for Britain which used to be the world’s international currency… when they lost that status, they lost a lot of things.”

Rogers says that governments are already working on their own digital currencies, but holds firm when detailing that he, “cannot see the world having 100% computer money Rogers predicts that sovereign nations will explain to citizens how government-issued digital coins will be secure and safe for the good of the people, and most will believe it.