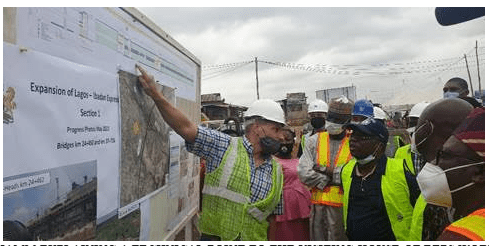 Members of the House of Representatives Committee on Works have lauded the country’s leading infrastructure development partner, Julius Berger Nigeria Plc for “the excellent work” being executed by the company on the Lagos-Ibadan Expressway, which they vowed would be completed as projected come 2022.

The Committee members, who are currently on tour of relevant federal capital projects under the Committee’s oversight functions, visited Section 1 of the Lagos–Shagamu Expressway awarded to Julius Berger Nigeria Plc Tuesday.

Led by its Chairman, Hon. Abubakar Kabiru Bichi, the Committee members were conducted round the entire stretch of the project by a team of Engineers from the Federal Ministry of Works and Housing led by its Controller (South West), Eng. Olukayode Popoola.

To set the evaluative tone for the inspection visit, the House Committee Chairman on arrival at the site, said, “Lagos- Ibadan road is the busiest road in West Africa. This is Section 1 of the entire length and Julius Berger is handling it. We hope the company is doing well and doing what is right because of pressure from the Executive and National Assembly, we do not expect to hear any delay.”

After the full inspection of the ongoing project works, however, and after necessary technical explanation of detailed project drawings at points along the project route by the Project Manager Engr. Olaf Tham, the Committee chair was full of appreciation for the good quality and tremendous progress thus far accomplished by Julius Berger on the Lagos-Sagamu Expressway project.

According to the apparently satisfied Committee Chairman, Hon. Abubakar Kabiru Bichi, “From what we are seeing on the project site in the course of our committee’s visit and inspection of the ongoing works, Julius Berger has done a lot and is almost completing the job. We will go back to Abuja to work on the issue of pending compensation for full acquisition of project right of way to enable the contractor complete the approximately eight kilometres remaining to fully deliver the LSE project as scheduled in 2022”.” Hon. Kabiru added that, “…we will continue to work with the Federal Ministry of Works and Housing to assist Julius Berger to achieve the project delivery date.”

Speaking further, Hon Bichi said, “…on the remaining issue of compensation (for project right of way), matters are being resolved; we have to do that so that the contractor will not have any problem meeting the 2022 schedule for handover of the completed project for commissioning by the Government. We will intervene and address this compensation issue once we get the correct position. We are happy the project stakeholders are cooperating, and we urge them to continue to cooperate with the Ministry and the contractors to achieve this strategic and priority project of the President Buhari administration.”

The Director, South West, Federal Ministry of Works and Housing, Engineer Adedamola Kuti, also speaking with journalists at the end of the inspection exercise said, “Operationally speaking, Julius Berger is doing excellently well and working to the planned schedule of works to deliver the LSE on time despite obvious challenges. We are all aware of the fact that the road carries heavy and steady traffic 24/7. Also, vehicles often break down at diversion points and cause traffic gridlocks; that is not the fault of Julius Berger; and it is only when the traffic outward Lagos gets to Shagamu that it diverts to Ibadan, Benin and Abeokuta.” Kuti, however, on a positive note said: “…that notwithstanding, given Julius Berger’s clear commitment to the works to deliver the LSE as planned, we can assure stakeholders that, barring any unforeseen circumstances, Julius Berger will deliver the project on schedule. Our people are on ground. Julius Berger is fully mobilised and operationally on ground and working assiduously. The Lagos Sagamu Expressway will be accomplished.”

Engr. Kuti informed the media that the project contract, which was originally awarded in 2013, later got adjusted and augmented with tollgates, bridges and the Sagamu interchange, by 2018.