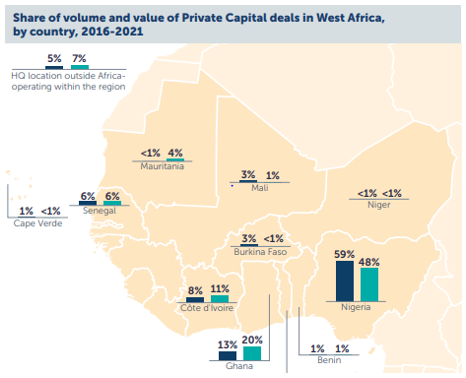 The $7.4 billion in private capital deal value more than doubled 2020’s total of $3.4 billion, surpassed the previous record of $4.8 billion reached in 2017, and represented an 85% increase compared to the historical annual average deal value over the period 2016-2020 ($4 billion).

The volume of private capital deals recorded in Africa, in 2021, also reached a record high of 429. Venture capital super-sized deals (deals above US$100mn) significantly contributed to this deal value increase, accounting for 32% of the total investment value.

The deal volume reported in West Africa was dominated by Nigeria, the largest economy on the continent, which concentrated 69% of the region’s total deal volume in 2021.

An example of a large multi-region deal announced in 2021 was TPG’s US$200mn investment in Airtel Mobile Commerce BV, which is the holding company for several of Airtel Africa’s mobile money operations and operates across multiple countries within Africa.

The largest deal within Africa’s Financials sector was the US$400mn investment in Africa-focused fintech company, OPay, from a consortium of investors in August 2021.

There was also a marked increase in co-investments by LPs and other investors in 2021, further demonstrating widespread confidence in Africa’s long term growth fundamentals.

Southern Africa fell behind West Africa in terms of deal volume in 2021 and accounted for the second largest share of private capital deals (20%) with South Africa – the region’s most mature and sophisticated market for private capital – attracting 78% of the deal activity.

East Africa’s declining share of deal volume and value does not reflect a decrease in investors’ appetite for investment opportunities within the region but rather indicates the strong dynamic of other regions. In 2021, East Africa attracted the fourth largest share of deal volume, with Kenya accounting for 66% of the total deal volume followed by Uganda (13%).

Although Central Africa has attracted the smallest share of the volume of private capital deals on the continent, the region has seen a handful of large deals in infrastructure related sectors that have significantly affected the region’s share of deal value within Africa.

In 2021, Central Africa accounted for 14% of the total deal value, driven by large infrastructure projects in Gabon’s transportation and renewable energy sectors. A notable example is the Meridiam and Gabon Power Company’s financing of Kinguélé Aval hydroelectric power plant in Gabon, which reached its financial close in July 2021.

In 2021, Financials experienced remarkable growth, attracting the largest share (30% and 39% respectively) of the total volume and value of investments reported in Africa.

This was the result of a handful of large deals in fintech companies operating across the continent. Some notable examples within Africa’s fintech space include the Series C investment round in Chipper Cash, an Africa cross-border payments company, which raised a combined US$250mn in May and November 2021 by a wide range of investors; the US$120mn investment in the Egyptian fintech, MNT-Halan, in September 2021 by a consortium of global investors.

The growth of the Financial Sector is further highlighted by the historical trend since Financials’ share of deal volume and value increased to 24% and 29% in 2019-2021, from 13% and 7% respectively in 2016-2018. Fund managers have also invested in sectors that help plug Africa’s infrastructure deficit such as Utilities, Communication Services, and Transport.

Utilities attracted a substantial share of private capital investments by value (18%) from 2016 to 2021, because of the significant capital required to construct renewable energy projects, which accounted for the majority of the value of the Utilities sector.

Private capital investment will continue to be targeted at Financial Services, Technology, Consumer Goods & Services, and Infrastructure sectors, according to the African Private Equity and Venture Capital Association, AVCA.

The rapid growth of mobile and internet penetration in Africa, coupled with challenges related to traditional banking infrastructure and services, have laid the foundation for fintech to flourish and transform the financial services sector in Africa.

Additionally, technology with its power to disrupt and transform the development of several other industries such as agribusiness, healthcare, mobility will also continue to be on investors’ radar.

With several large infrastructure funds about to reach their fundraising targets, we can expect significant development within the asset class as investors translate the continent’s infrastructural deficits to lucrative commercial opportunities with the potential for strong returns. Furthermore, with the consumer theme continuing to be prevalent in Africa’s private capital landscape, industries associated with consumer services and FMCGs remain attractive investment options. The relaxation of the travel restrictions, and the reopening of the economies will likely drive increasing interest in Africa’s hospitality sector.

Finally, in 2021 a record level of African startups managed to raise capital from a wide range of investors.