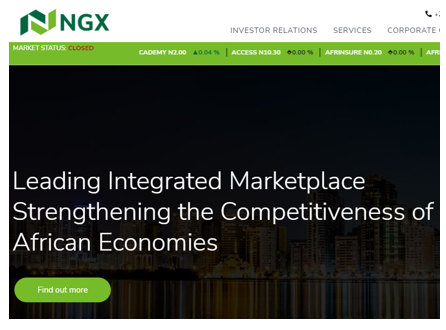 The Nigeria Exchange Group (NGX) is set to increase its equity stake in securities clearing firm CSCS and has made a N14.1 billion deposit to that effect, sources familiar with the matter tell MoneyCentral.

Central Securities Clearing System Plc or (CSCS) is Nigeria’s Central Securities Depository (CSD) licensed to carry on the depository, clearing and settlement of all transactions in the Nigerian Capital Market.

The transaction is awaiting regulatory approval, according to the sources.

“The NGX has deposited funds to purchase additional CSCS shares. In the first Quarter results NGX would have reported a loss if not for CSCS dividends,” the market source said.

Indeed, the NGX Group reported an operating loss of N36.59 million in the first quarter of 2022. When N375.8 million of profit from its equity accounted investees (CSCS) is added to the bottom-line however NGX managed to swing to N339.2million in pretax profit, data from its Q1 financial statement seen by MoneyCentral shows.

CSCS declared the sum of 74k for every share held as dividend for the 2021 financial year, bringing the total dividend payable to N3.7 billion.

CSCS which closed trading on the NASD OTC exchange on Friday at N17 per share has a market capitalization of N85 billion.

That means the NGX will be able to buy additional 16.58% stake in CSCS potentially increasing its stake to 45.77% and solidifying its ownership as the largest shareholder.

The NGX closed trading at N24.05 per share on Friday and has a market capitalization of N47.24 billion, meaning its valuation is about half that of CSCS.

CSCS was licensed by the Securities and Exchange Commission and operates a computerized depository, clearing, settlement and delivery system for transactions in shares and fixed income securities listed/traded on the Nigerian Exchange Limited, NASD OTC Exchange or any other authorized/organized Securities Trading Platform in the Nigerian Capital Market.

The Company also acts as a depository for Federal Government of Nigeria (FGN) Bonds, Municipal and Corporate Debt instruments.

However, it remains to be seen if this is the most efficient way to deploy N14.1 billion by the NGX.

“The NGX sees CSCS as their baby. It is also a way to ward of competition which may be eyeing the shares,” a second market source told MoneyCentral.

That competition will include firms like FMDQ which has also recently made moves to own a major stake in CSCS.

In December 2021, MoneyCentral reported that FMDQ Group had reached an agreement to acquire over 20% of CSCS. The value of the transaction is currently undisclosed.

According to sources with knowledge of the transaction, the FMDQ Group will buy out shares owned by Leadway Insurance and from Artemis Ltd, a vehicle owned by Verod Capital. The two entities own 16.6% and 5% respectively delivering a combined 21.6% ownership of CSCS.

The deal is subject to the approval of the Security & Exchange Commission and the Federal Competition and Consumer Protection Commission (FCCPC).

MoneyCentral  understands that FMDQ acquisition of major shares in CSCS provides the latter with a strong shareholder with enough experience, capacity, and capital to help drive growth in an increasingly changing capital market that requires significant investment in technology and manpower.