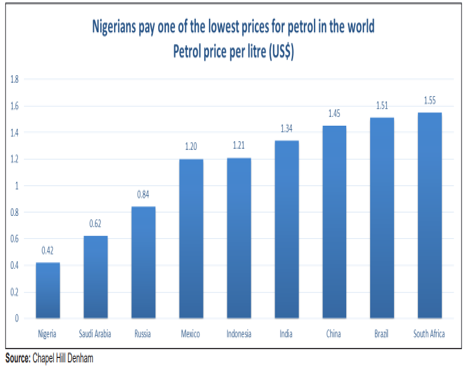 Nigerians pay one of the lowest prices for petrol in the world, yet there is tumultuous uproar by consumers whenever there are suspicions a hike in the pump price is looming.

A new report by Chapel Hill Denham shows Nigeria ranks 8th with the cheapest petrol price in international markets, with the average consumer paying $0.42 per liter.

Pump prices in the United States have hit as high as $5 a gallon or $1.37 a litre due to the Russian invasion of Ukraine and supply chain bottlenecks that have forced the Federal Reserve to hike interest rates to tame inflation capable of tipping the country into a recession.

Nigerians are paying one of the lowest pump prices in the world because of the heavy subsidies spent on imported products by the government.

In an interview with Bloomberg, President Muhammadu Buhari said that total removal of subsidies is untenable after consultation with stakeholders and that some Western countries also administer subsidies.

It appears the government is afraid that total removal of subsidies further undermine the economy and tip more people into the poverty zone as over 50 percent of Nigerians live on less than $1.90 a day.

On the other hand, subsidy payments benefit the wealthier households. And what this means is the government has been subsidizing the lifestyle of the rich who own fleets of cars in their compounds to the detriment of rural dwellers.

“Going by the figures we obtained from the World Bank, Households in the bottom 40% of Nigeria’s income distribution account for less than 3.0% of all white  product purchases,” said analysts at Chapel Hill Denham.

“For proper context, 75% of all white products sold in Nigeria are consumed by private firms, public transportation services, government agencies, and other business entities. Against this backdrop, one can potentially conclude that subsidy may have outlived its purpose,” said the analysts.

There has been scarcity of petroleum products across the country as the Nigeria National Petroleum Corporation (NNPC) is the sole importer of the products while the government fixes prices.

It is important to note that independent petroleum marketers are unable to bring in the product due to a severe dollar scarcity as they also claimed that they cannot sell at the current price.

To unlock the potentials in the downstream oil and gas sector and make the country a refining hub, the sector has to be completely deregulated so that demand and supply determines the price of the product.

There are concerns that Dangote Refinery’s 650,000 capacity that is coming on board in 2023 is unlikely to sell refined products to  the domestic consumer at the current subsidised rate.

Nigeria will spend N3 trillion on petrol subsidies in 2022, and the amount may likely increase because of a rally in crude oil price.