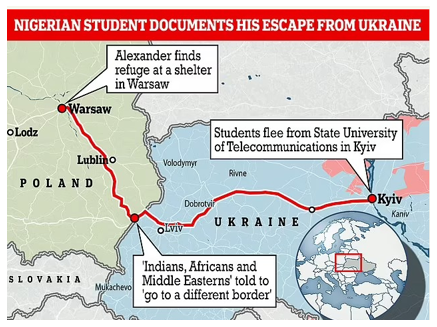 A student from Nigeria has recounted his four-day, 590-mile journey trying to escape th Russia Ukraine war, after he and hundreds of others were told they could not pass through the border by ‘racist’ guards.

Alexander Somto Orah, 25, spent four days trying to escape from Kyiv where he was studying at the Ukrainian capital’s State University of Telecommunications.

The Nigerian native gathered his belongings and headed for the border a day after Russian forces invaded Ukraine.

But he and hundreds of other students were stopped from reaching the border of Poland by guards who said no to ‘Indians, Africans and Middle Easterners’, ordered to make their way to another border.

“The war made me realise that if there are human beings, there are others that are regarded differently to others,” Mr Orah said.

“I have never experienced war. I have watched videos of war and I know how crazy it can be. I don’t want to be collateral damage.

“The degrees were like minus three, minus four, sometimes I felt so cold I couldn’t do anything. And sometimes I would be very hungry. But I can’t eat.”

“I can’t describe my feeling yet because it was somehow weird for me. Like, you are sleeping, from sleeping you are packing bags, from packing bags you are running.

“I started running from the 25th of last month.

“Crossing the Ukraine border to Poland was devastating because of the discrimination. The first discrimination was at Kyiv train station.

“They were allowing only women and children, I said “OK, that’s fine”, but I don’t see you taking the other African women and the other Middle Eastern women, they are pregnant.

“And they were actually in the cold, some with their kids. We’ve been here for three days. We’re dying of cold.”

A shocking video taken by Alexander at the Polish Ukranian border shows crowds of Nigerian students shouting at officials to let them through.

The officials, who are wearing hi-vis vests in the videos, are shown pointing large guns at the crowds who can be heard shouting, “We’ve been here for three days, we’re dying of cold.”

The clip cuts to the shocking moment a white van reversing away from the crowds of refugees before driving towards them to push them back.

“We were shouting and we started moving forward. They called for backup, which is the police. When the police came, the police also stood in a shooting position, just like the other one, and he wanted to shoot us,” Mr Orah said.

“We were telling him that he should not try to shoot us because we didn’t commit a crime, we didn’t live in your country illegally.”

After more back-and-forth with police and officials at the border of Poland, Alexander explained that they finally got to the border, only to be told that it was closed.

This left the 25-year-old and the rest of the crowd stranded: “We have to sleep outside again with the snow and everything.

“The next day, they told us to form a line, and the line we formed it.

“After some hours in the morning, that’s around 9 to 11, then by 12, one man in black came and told us, “Indians, Africans and Middle Easterners should leave here and go to another border,” which is the Romanian border.

“We told him that we could not do this thing again. We have been on the road for three days, and we cannot go back.

“I felt like maybe someone might die here, because there are some people fainting, and there was no blanket so we were just covering ourselves with our clothes and anything we could find.”

Alexander finally made it through the border four days after he left Kyiv.

Amazon Seeks Qualified Candidates For Positions Based In Nigeria