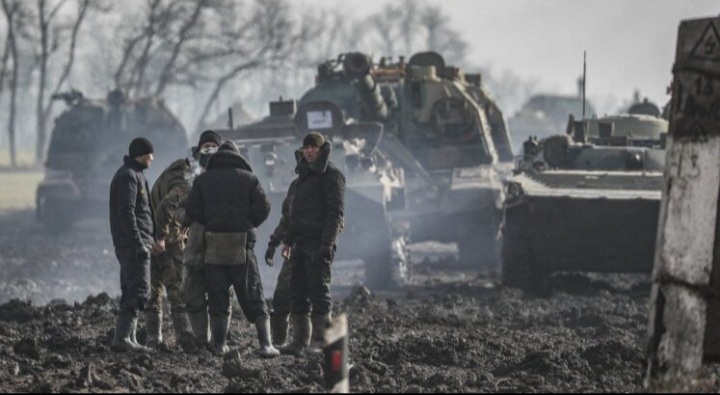 Russian forces stepped up their assault on major Ukrainian population centers on Thursday, appearing to capture the strategic southern port city of Kherson while turning to siege tactics elsewhere in the face of fierce resistance.

The latest: An adviser to Ukrainian President Volodymyr Zelensky tweeted that negotiators were on their way to a second round of peace talks with Russia. Russia’s foreign minister said earlier that Russia would not stop attacking Ukraine’s military infrastructure as a precondition, despite Ukraine’s demands.

State of play: The U.K. Ministry of Defense said in an intelligence update that the 40-mile Russian convoy outside of Kyiv had made “little discernible progress” and was over 19 miles from the city center.

“Despite heavy Russian shelling, the cities of Kharkiv, Chernihiv and Mariupol remain in Ukrainian hands,” the MoD said. “Some Russian forces have entered the city of Kherson, but the military situation remains unclear.”

Context: The Russian military claims it has seized control of the southern port city of Kherson, which has a population of 300,000 and would be the first major city in Ukraine to fall.

Kherson’s mayor said in a Facebook post that he reached an agreement with Russian forces on civilian movement.

Meanwhile, Mariupol was encircled by Russian troops, but Ukrainian forces reported on Thursday morning that they still had control of the southeastern port city of about 500,000.

Kharkiv, a Russian-speaking city of 1.4 million, was under heavy attack. Russian airborne troops landed in the city over Tuesday night following days of heavy bombardment.

Between the lines: A senior Pentagon official said seizing Mariupol and Kharkiv would allow Russia to cut off eastern Ukraine and pin Ukrainian forces away from Kyiv.

The big picture: The Russian plan to sprint to Kyiv and force a swift capitulation has faltered under stout Ukrainian resistance. But Russian forces are taking towns and cities, particularly in the south, intensifying their bombardments of cities like Kharkiv in the east, and continuing to funnel forces toward the capital.

State of play: Russia has committed 82% of the combat power it assembled on Ukraine’s border but continues to be “bedeviled” by “logistical and sustainment issues” such as lack of fuel, a senior U.S. defense official said.

Russia has become “much more aggressive” in its use of missiles and artillery targeting cities, including civilian infrastructure around Kyiv, the official noted.

Both Kyiv and Kharkiv remain under “continuous assault,” but there has been no “appreciable movement” by Russian forces to successfully take control of either one.

What they’re saying: In a new video address on Thursday, Zelensky called Ukraine “a nation that broke the enemy’s plans in a week — plans that have been built for years, with hatred of our country, of our people, of any people who have heart and freedom.”

“Despite the fact that their quantity is ten times bigger, the morale of the enemy is deteriorating. More and more invaders are fleeing back to Russia,” Zelensky claimed.
He praised the ordinary civilians who have been captured on video fighting back against Russian troops, standing in front of tanks and forcing the “invaders” out of grocery stores — doing their part in this “patriotic war.”

By the numbers: Ukraine’s State Emergency Service said Wednesday that more than 2,000 civilians have been killed since Russia invaded on Feb. 24. Attacks on civilian areas have increased in the past 48 hours, but the casualty number is impossible to verify.

In its first acknowledgement of significant casualties, Russia’s defense ministry announced that 498 Russian troops had been killed and 1,597 injured. Ukraine has claimed its forces have killed more than 5,300 Russian troops. Neither figures have been independently verified.

A senior U.S. defense official declined to comment on the accuracy of the Russian figures, but said: “My advice to anyone would be to be extremely skeptical over any information the Russian Ministry of Defense puts out there.”

Zoom in: Kyiv Mayor Vitali Klitschko said Wednesday that there was fighting on the capital’s outskirts and told residents to remain indoors but be prepared to defend their city. “The enemy is massing forces closer and closer,” he said. Residents were preparing for a siege.

Residents in cities across Ukraine have put their bodies in front of tanks and shouted at Russian troops to go home. In the town of Enerhodar, home to Europe’s largest nuclear power plant, residents are barricading the streets.

U.S. and Ukrainian officials said Russian troops never expected to be ordered into Ukraine and many are demoralized, even abandoning equipment without a fight in some cases.

At least 1 million Ukrainians have fled to neighboring countries, the U.N. said Wednesday.

The EU is planning to allow Ukrainian refugees to live and work in the bloc for up to three years.

But there have been heartbreaking scenes in cities like Kyiv as fleeing families have been separated or struggled to squeeze into over-packed trains.

In Russia, citizens are watching their savings deplete as the ruble crashes and losing access to everything from new iPhones to Disney films to flights to Europe. The Russian stock market remains closed but investors are desperate to get their money out.

Alexei Navalny, the jailed opposition leader, called Wednesday for protests in the main square of every Russian city at 2pm on weekends and 7pm on weeknights.

Russian authorities have vowed to arrest anyone who protests, but there have still been significant gatherings in Moscow and St. Petersburg.

What else is happening: 141 countries voted in favor of a UN General Assembly resolution “deploring” Russia’s aggression, while five voted against and 34 abstained.

Ukrainian authorities claimed they had foiled an assassination plot against Zelensky by a unit of elite Chechen special forces, in part thanks to tips from members of Russia’s Federal Security Service who do not support the war. That claim could not be verified.

Zelensky is pushing for an accelerated acceptance into the European Union, which he said would be a signal that Europe accepted Ukraine as an equal member. It would also be an economic boon after the war.

He’s also pleading with NATO for a no-fly zone, but that would force NATO to possibly shoot down Russian troops and risk a far wider conflict between nuclear powers.

Former President Dmitry Medvedev tweeted a warning that “in human history, economic wars quite often turned into real ones,” while Foreign Minister Sergei Lavrov warned that a third world war would turn into a nuclear war.

Putin has already put Russia’s nuclear deterrence force on alert, citing the sanctions and “aggressive language” from the West.

U.S. Defense Secretary Lloyd Austin canceled a ballistic missile test scheduled for this week “to demonstrate we are a responsible nuclear power” in response to Putin’s actions.

The U.S. and European allies are scrambling to get weapons through Poland to the front while they still can. Moscow has said that it will hold countries that supply weapons used on Russian troops responsible.

What to watch: With Russia closing in on Ukraine’s largest cities and employing newly aggressive tactics, such as the bombing of civilian areas, the danger to civilians is growing.

The chief prosecutor of the International Criminal Court has opened an investigation into allegations of war crimes, crimes against humanity or genocide committed in Ukraine since 2013.

With peace talks currently showing little likelihood of success, analysts and officials are considering what off-ramps might still be available.