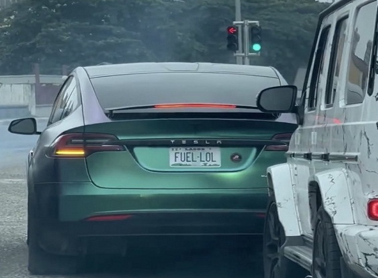 This is the Tesla car spotted in Lagos with hilarious number plate. It reads “FUEL-LOL“.

The owner is probably throwing shades on those who use fuel for their internal combustion engine.

Telsa cars are fully electric and does not run on fuel. You can only charge them and that’s all.  So this owner has no business whatsoever in fueling his/her car.

Tesla just posted its second-quarter vehicle production and delivery numbers for 2022. Here are the key numbers:

Delivery numbers, which are the closest approximation of sales reported by Tesla, fell just shy of analysts’ expectations.

According to a consensus compiled by FactSet-owned Street Account, analysts were expecting deliveries of 256,520 vehicles for the quarter, which was marked by Covid restrictions, supply chain snarls, semiconductor chip and other parts shortages.