A Kurdish commander in the Syrian Democratic Forces, the US-backed group that helped defeat ISIS, was murdered in a targeted assassination by a Turkish drone strike in Syria on July 22.

Salwa Yusuk, 42, a deputy commander of the US-backed Syrian Democratic Forces (SDF), was one of three female fighters who were killed last Friday near Qamishli, Syria, the US Central Command announced in tweets on Sunday.

“Salwa was a critical SDF leader who led forces in combat vs ISIS since the height of the fight to defeat the vile ideology in NE Syria in 2017,” CENTCOM stated. 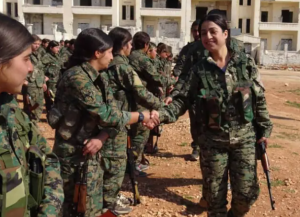 “CENTCOM extends our condolences to the Families of these 3 SDF fighters, the people in Northeast Syria & our SDF partners.”

The other victims of the drone strike have been identified as 30-year-old Joana Hisso and 19-year-old Ruha Bashar.

Yusuk, who also went by the name Ciyan Afrin, and the two other women were traveling in a car when it was struck by a Turkish drone, according to US military officials speaking to NBC News.

“There is no doubt she saved American lives on the battlefield,” one official speaking on condition of anonymity told the agency, referring to Yusuk.

Turkish President Recep Tayyip Erdogan has previously condemned the US for supporting the SDF, which Ankara considers a political front for two terrorist organizations, the People’s Protection Units and the Kurdistan Workers Party (PKK).

The Turkish state news agency Andalou Agency asserted that the PKK has been responsible for the death of at least 40,000 people over the past 35 years.

He told RepublicWorld.com that CENTCOM’s public stance shows the “insincerity of the US in the fight against terrorism. Terrorist is Terrorist.”

The US has about 900 troops in Syria serving in a mostly advisory role for Syrian Democratic Forces combating ISIS.
Share
Facebook
Twitter
Pinterest
WhatsApp
Previous articleRapper JayDaYoungan, 24, Shot and Killed in Louisiana Hometown
Next articleUdinese vs Chelsea: Pre-season Prediction, Kick Off Time
- Advertisement -