This week, the Wall Street Journal released a list of the Top 10 used cars that were at the tip of the spear of the rising prices. Leading the charge was the unlikely Dodge Caravan, followed by the Nissan Versa and Toyota Prius.

While not aesthetically pleasing, the top three cars on the list are notably utilitarian: the Caravan can seat many passengers, the Versa has trunk space and the Prius gets great gas milage, as a hybrid. 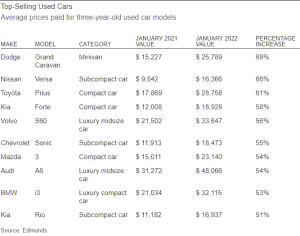 Ivan Drury, senior insights manager for Edmunds, told the Journal that “bargain hunters are seeking the most affordable options, rather than looking for the newest or flashiest car.”

The list continues with the Kia Forte, the Volvo S60 and the Chevy Sonic. Their prices have risen an astronomical 58%, 56% and 55%, respectively.

Over the last year, the used car market boomed because of a chip shortage for new vehicles.

The latest data from Manheim shows that even though prices increased for January, momentum could be stalling (and, in fact reversing).

The Manheim Used Vehicle Value Index expanded slightly to 236.3 last month, up 45% from a year ago. The non-adjusted price change declined about a percent compared to December, leaving the unadjusted average price up 40.8% year-over-year.