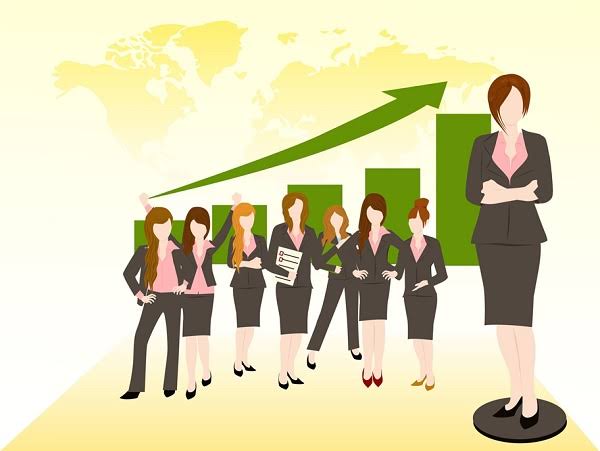 Women have been leading for years at home, in the community, and in the workplace. At a tender age, women learned to be great at multitasking, solving problems, managing available resources, and how to highly collaborative.

They use the little available to build and maintain the base around them by building a relationship through engagement to accomplish stated goals. The natural ability to lead by women is often underrated in organizations because of gender bias, and cultural stereotypes.

Despite an increase in the number of women graduates compare to men over time, coupled with an increased number of women participants in the labor force higher when compared to the ’60s and ’70s, with women making up half of the workforce in Nigeria and the world. Regrettably, for women, their male counterparts get rapid promotion and are considered for leadership roles while the women’s work ethics and rigor go unnoticed.

However, actively women have fought to break through the prejudice attached to leading in both private and public organizations, and politics. A few examples of women breaking barriers in Nigeria and Africa, starting with Amina the warrior Queen of Zaria debuting as the first woman to rule an African kingdom in the 15th century, the Dahomey Benin female warriors, Ghanaian Queen Ashantiwa who led the war against the British colonials in Ghana, Empress Candace of Ethiopia, and others. Bringing it closer to the organizational successes of female trailblazers in Nigeria, Chief Bola Kuforiji-Olubi is one of the trailblazers even before the dawn of the fight for gender equality.

Then later in her career life was appointed a minister of Commerce and tourism during the Ernest Shonekan interim government in 1993. These women has paved the way for many more women professionals in politics, private and public organizations, with women treading in roles that were exclusively in the past were reserved for men only; examples includes Funmi Opeke an electrical engineer CEO of main Cable and founder of Main Street Technologies, Ibukun Awosika Nigerian businesswoman, who was appointed First Bank of Nigeria Limited’s first woman chairman in September 2015 since its establishment in 1854, Ellen Johnson Sirleaf the first democratically elected woman president of Liberia 2006-2018, Nobel Peace Prize winner 2011 for her work on women empowerment and the first female leader in Africa to address the UN General Assembly, Meaza Ashenafi is another trailblazer in Ethiopia, the first female Chief Justice of Ethiopia and her leal advocacy works with Ethiopian Women’s Lawyers Association, Ngozi Okonjo-Iweala former Minister of Finance in Nigeria and currently appointed first African and woman Director General of the world trade organization (WTO) after working for 25 years at the word bank and she sits on the boards of global organizations like Twitter e.t.c.

There are many more women excelling in top positions both in Africa and the world, today’s women leaders are diverse, persistent, inspiring, and improving lives in Africa and the world, but despite all these achievements gender equality is still a problem. All these women were challenged and faced with a lot of bias due to their gender because organizational leadership over the years has been masculine and women roles relegated to that of homemakers.

Similar, research on the mammalian world by Smith al 2020 shows evolution favors the male species which shows the rarity of female leadership in the mammalian world, using a comparative framework by evaluating the data of 76 species of non-human mammals. Though the times have changed, nevertheless, cultural, and societal prejudice persists and because men have been leaders in organizations for a long time when opportunities are available because men are predominantly decision-makers, it makes it hard for women to get into those roles and their other barriers to entry as well, which includes organizational policies that do not gender-friendly, work, life, and family balance.

Women have been made to let go of their careers to birth and bring up children or when their spouses get transferred to other locations. pay inequalities, research has found that men get paid better in a job role or position where they have both genders thus reducing the spending power of the women.

Another challenge faced by women is criticism from other females that perceive these women as being overly ambitious. Some discrimination or backlash women in top roles have received from the workplace in Nigeria includes, we do not have room for a woman leader in this organization, I have a woman like you at home, so you cannot boss me around and the perception that women got these leadership roles not by hard work but by other means. Hence, women must work doubly harder to prove their competence and ability to lead in top higher roles.

The increase in the number of women on the boards of Nigerian banks is due to an intentional decision made by the Central Bank of Nigeria, Although the Securities and Exchange Nigeria has no legal system or obligation for diversity at the top, however, the Central bank of Nigeria (CBN), the Securities and Exchange Commission (SEC) issued a regulation with the Code of Corporate Governance in 2018 requiring a minimum of 30 percent female representation on all bank boards, and necessitates setting intentional diversity goals when filling open positions on the board. Notwithstanding gender quotas were not stipulated, therefore women aspiring to be board members must have significant shares in that organization.

Globally women in Africa occupy political representation in government according to the UN woman 2017, this high figure is contributed by women in Southern and East Africa, a rise in the number of women representations is required in other parts of Africa including Nigeria. Africa has considerably increased women’s representation at the top in the world and there is a need for organizations both in Africa and Nigeria to commit by acting using processes to support gender equality. The UN women Africa leadership appendage in 2017 research findings, reveals women in Nigeria compared to other African countries only held 6 percent of the membership in the legislature, and over 65 percent of women in Nigeria are poor and an average of 28 percent have experienced physical abuse from the age 15.

There is a need to integrate gender and diversity into leadership theories because it is becoming more evident that the women’s style of leading is progressively viewed as effective for leading. Several studies support the prominence of men’s leadership styles as task-oriented while women are person-oriented, strong evidence shows the inclination of women towards a democratic, collaborative, and transformational style of leading whereas men are more autocratic, direct, and competitive in their management style.

Chin et all 2007 on women and leadership surveyed a hundred feminist women leaders and found women sought leadership roles to achieve social justice, empower others, and are ethical and transformational in their visions As women represent over half of the global talent pool, it is clear to us that they should be at the forefront of the economic and social scene, not just out of a sense of fairness, but to ensure that the absolute best minds, men’s, and women’s alike, are brought together to address the challenges that society faces.

Organizational Investors have also seen the importance of diversity brought by women into the boardroom and thus asked for increased positions for female CEOS which informed the increase from 21 women on the board of organizations to 32 as recorded by the 2018 fortune 500 companies report, and the May 2020 report recorded 37 women as head of fortune 500 organization a significant leap from the previous year.

Achieving gender diversity in corporations, at all levels, is a long and demanding journey, which requires the involvement of the whole company and the strong commitment of top management. Therefore, they believe that beyond gender diversity, what always matters ultimately is leadership. However, for gender equality, the number of women leaders needs to grow both in private, public, and political settings.

The growths achieved by women leaders have been shown by researchers not to be powerful or influential because most leadership roles occupied by women are mostly administrative with no path to an executive position. Therefore, Organizational culture and policies must be updated to support women’s succession to leadership roles by promoting gender diversity in other organizations and countries to benefit from the unique offering of a diverse team.