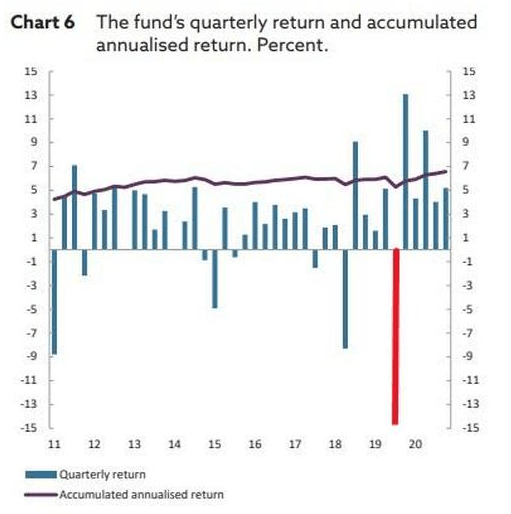 Norway’s $1.3 trillion sovereign wealth fund posted a 9.4% return on investment for the first half of the year.

The fund noted that its strong performance came from “sectors exposed more to inflation, such as energy, financials, materials, real estate and industrials,” earning it 990 billion crowns ($111 billion) in the January-June period.

Specifically, in the face of global pleas that everyone cut fossil fuel exposures, it seems the giant ‘oil fund’ made much of their massive gains from non-ESG energy stocks!!

“Energy companies delivered the period’s strongest return of 19.5 percent. Oil prices climbed during the first half of the year as a result of stronger global demand for oil and lower oil stocks due to OPEC+ producers restricting the supply of oil.”

Even more ironically, the fund lost 1.93% in the first half of the year on its renewable energy infrastructure investments.

CEO Nicolai Tangen, a former hedge-fund manager who’s been running the world’s largest sovereign investment vehicle for almost a year – since the previous CEO’s “scandalous” resignation – told Bloomberg TV’s Jonathan Ferro that given their size and investment horizon, “it is limited what we can do.”

“We are very long-term investors, and we’re so big it is kind of difficult to move around,” adding that “we are in a way also too big for counterparties.”

However, Tangen, who has repeatedly cautioned against expecting strong returns to continue, warned that inflation is now emerging as the biggest threat…

“We are at a situation now where bond yields are extremely low and the stock market is extremely high and so therefore any major change in inflation will hit both parts of the portfolio – the bond market and the equity markets at the same time,” he said.

“In the past, it’s been one and not the other. But this time, both can move in the same direction.”

The fund could shorten the duration of some of its bond holdings or reduce the portion of equities in the overall portfolio, Tangen said, declining to say whether the fund was taking these steps or considering taking them.

The fund’s worst ever quarterly performance was in January-March 2020, when the pandemic began, and the fund lost $153 billion.