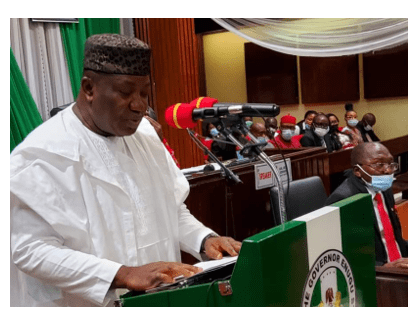 The governor explained that the projections for the 2022 Budget of the state were founded on the economic and fiscal updates of “National Inflation Rate of 13%; National Real GDP Growth of 4.2%; Oil Production Benchmark of 1.88 million barrels per day; Oil Price Benchmark of $57 per barrel and Exchange Rate of N410.15 per US Dollar”.

Gov. Ugwuanyi hinted that the key deliverables of the 2022 Capital Budget include completion of all ongoing projects; purchase of 10 tractors and other agricultural equipment to assist mechanized farming in the state; provision of agricultural inputs, infrastructure and upgrading of wet markets for production and enhanced food processing (NG-CARES); using the Agro processing, Productivity Enhancement and Livelihood Improvement Support (APPEALS) for Capacity Building, Women/Youth Empowerment, and Development of Farmers’ Aggregation and Processing Centres; purchase of Waste Disposal Compactor Trucks and dumpsters to enhance urban cleanliness; and launch of the 4th edition of Traders Empowerment scheme for 57 major urban and rural markets in Enugu State.

Other key deliverables of the 2022 budget, according to the governor, were the establishment of facility centers for industrial processing of value chain for palm oil, cassava and cashew nut in Enugu State; construction of Ibagwa – Itchi, Iheaka – Iheakpu-Awka Roads in Igbo Eze South Local Government Area; rehabilitation of Agbani Road-Police College-Gariki Flyover Road (By Port Harcourt Expressway); construction of Bridges/River crossings over Ogurugu River, Adada River and River Obinna in Uzo-Uwani LGA, Ike River in Aninri LGA, Ogbafun River, Agu Idume in Nkanu East LGA amongst others; rehabilitation of basic schools across the 17 LGAs of the State; construction of Type III Primary Healthcare facilities in Oji River, Awgu and Aninri LGAs; completion of ongoing key infrastructure for the take-off of College of Medicine and Teaching Hospital, Enugu State University of Science & Technology, Igbo Eno; and drilling, rehabilitation and reticulation of Water Boreholes in Communities across the State.

Gov. Ugwuanyi who revealed the desire of his administration to hit the ground running in the New Year, as it implements its last full year budget; added that the key deliverables of the 2022 budget proposal were also rehabilitation and upgrading of Recreational Parks (Eze, Onwudiwe and Coal Camp); upgrading and improvement of Enugu Urban Water Supply and Distribution System through the AFD-funded 3rd National Urban Water Sector Reform Project (3rd NUWSRP); construction of Court buildings to include three (3) High Court buildings in three (3) Judicial divisions – Udi, Orba and Amagunze, six (6) Magistrate Courts buildings in Amechi Idodo, Nike, Orba, Nara, Ozalla and Awhum, Enugu State; perimeter Fencing, Landscaping and Furnishing of thirty-four (34) Customary Courts already built across the State; bulk Purchase of Electricity Distribution Transformers (500KVA and 300KVA) to upgrade and replace the failed ones in the rural communities of the State; construction of Oji River Township Stadium, Oji River LGA, and establishment of additional Enugu State Technology Hub and Innovation Centre at 9th Mile, Udi LGA.

On 2021 budget performance, Gov. Ugwuanyi pointed out that the year started on a note of recovery as national and sub-national governments embarked on strategic economic engineering, through innovative economic policies, to reflate the Covid-beaten economy of the previous year.

He said that his administration embarked on deliberate measures to bring succour to Micro, Small and Medium Enterprises, adding that “Enugu State engaged fully in the preparatory activities for the Nigeria Covid-19 Action Recovery and Economic Stimulus (NG-CARES) Program for Results, an initiative of the Federal Government of Nigeria supported by World Bank to mitigate the economic disruption occasioned by the Covid-19 Pandemic by protecting the livelihoods and food security of the poor and vulnerable families while facilitating the recovery of local economic activities in all the participating States.”